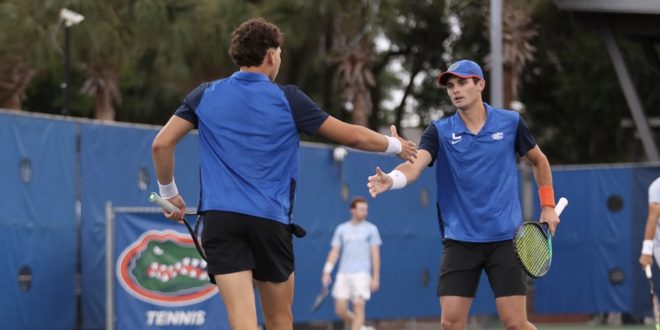 Florida’s Sam Riffice and Ben Shelton continue their dominant performances in the NCAA Men’s Tennis Individual Championship. After combining for three wins Tuesday, they look to build on their victories in the Round of 16.

In the Round of 64, Riffice took on Ohio State junior Cannon Kingsley, who came in ranked ninth nationally. Riffice took the first set with a score of 7-5. He would then win the next set 6-2 to bring him to the next round.

Riffice then faced LSU sophomore Ronnie Hohmann Wednesday. He only needed two sets to advance, taking the first one 6-4 and the second one 6-3.

Sophomore Ben Shelton came into the tournament as the second ranked tennis player in the nation. This season, Shelton recorded a 34-5 overall singles record and a 23-10 overall doubles record.

Shelton started out the tournament with a matchup against Michigan junior Ondrej Styler. The Czechia native ranked 27th nationally. Shelton was able to advance over Styler in two sets, taking the first one 7-5 and the second one 6-2.

In the Round of 32, Shelton took on Notre Dame senior Axel Nefve. Nefve ranked 57th in the nation and will be transferring to Florida for the fall semester. Nefve put up more of a fight, forcing the two to decide the matchup in a tie-breaker. Shelton would win the tie breaker 7-6 to advance to the next round.

On Wednesday, Shelton faced off against Ohio State Buckeye sophomore JJ Tracy. Shelton would take two sets with a score of 6-4 each to advance.

The two Gators also found success in their doubles matches.

On Tuesday, the pair defeated Juan Pablo Grassi Mazzuchi and Matias Soto from Baylor. The Gators took them down in two sets, winning the first one 6-4 and the second one 6-3.

Riffice and Shelton advance to the Round of 16, where they will take on Justin Boulais and James Trotter from Ohio State.

Previous Rangers Even Up Series with Hurricanes, Oilers Take 3-1 Lead Over Flames
Next Rays look to sweep the Sunshine Series