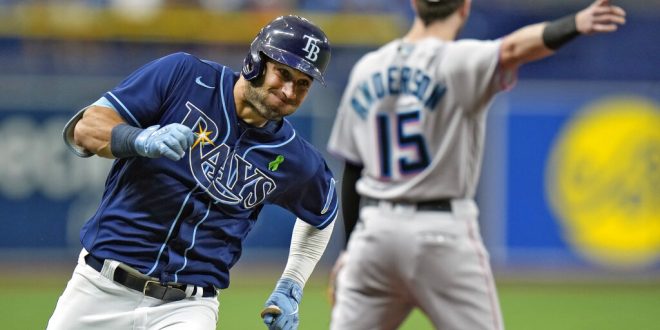 The battle of Florida continues Wednesday night as the Rays take on the Marlins for the conclusion of their two game set.

In game one of the series the Rays took the win handily, defeating the Marlins 4-0.

The Rays did not take long to get the offense going in as Kevin Kiermaier hit an inside-the-park homerun on the very first pitch of the game.

Tampa Bay took hold of the lead early and never looked back.

The Rays were boosted defensively by a stellar pitching performance from their ace, Shane McClanahan. In six innings of work, he threw nine strikeouts while allowing no runs, four hits and two walks. Then the bullpen came in and finished the job, allowing no runs and only one hit in the final three innings of the game.

The Rays continued to score via the long-ball in this one, as sluggers Ji-Man Choi and Harold Ramirez both took one deep in this ballgame. This was an especially nice moment for Ramirez, being able to homer against the team where his MLB career began.

Right hander Drew Rasmussen is set to take the mound for the Rays in their series finale against Miami Wednesday night.

Rasmussen has had a very strong start to the season for the Rays. In his eight starts, he has a 4-1 record while posting a 2.33 ERA.

He is set to face off against Marlins young right hander, Cody Poteet.

Poteet has been solid for the Marlins so far this season with an ERA of 0.78. It is worth noting, however, that Poteet isn’t typically a starter for the Marlins. He is making only his second start of the season. In his first start, Poteet pitched 4.2 innings, allowing only one hit and no earned runs.

The Rays will be getting back their right fielder in Wednesday night’s matchup, as Manuel Margot makes his return to the lineup. He returns after being placed on the IL on May 15th.

For the Marlins, their injury situation continues to be a problem. They will be without both infielders Jazz Chisholm Jr. and Miguel Rojas Wednesday night, as they both continue their stint on the IL.

The final game of the quick two game series is Wednesday night at Tropicana Field.

@jamiegoldman66
Previous Gators Finding Success in the NCAA Men’s Tennis Individual Championship
Next US Open Cup Round of 16: Orlando City vs. Inter Miami