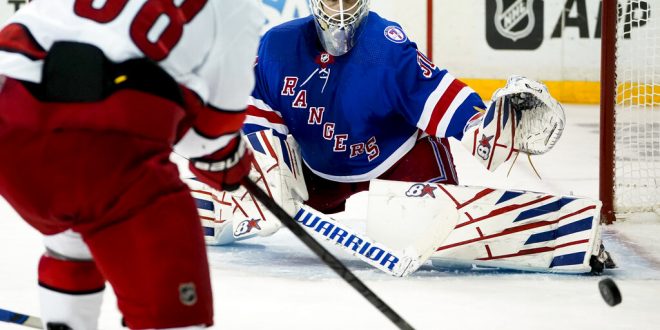 Rangers Even Up Series with Hurricanes, Oilers Take 3-1 Lead Over Flames

As the second round of the Stanley Cup Playoffs continued Tuesday, both the New York Rangers and Edmonton Oilers triumphed on home ice.

The Rangers defeated the Carolina Hurricanes 4-1 in Game 4 to even the series 2-2.

Out west, the Oilers held off the Calgary Flames 5-3 to take a commanding 3-1 series lead.

The Rangers were out in full force at Madison Square Garden. All cylinders from offense to defense to goaltending were of brilliance.

Frank Vatrano, a trade deadline acquisition from the Florida Panthers, started things off with a power play goal at 13:31 in the first period.

The power play came following a massive hit from defenseman Jacob Trouba on Canes forward Max Domi. A legal hit along the side boards, Steven Lorentz of Carolina came to the defense of his teammate and dropped the gloves with Trouba. Lorentz was assessed a minor penalty for instigating along with a 10-minute misconduct, combined with a 5-minute fighting major.

Two minutes later, Adam Fox would make it a 2-0 game with a deflection off a Ryan Lindgren shot.

In the second period, Mika Zibanejad swept in a puck behind Antti Raanta to push the lead to 3-0 at 16:48.

Teuvo Teravainen scored at 6:33 in the third period to keep the Hurricanes from being shutout, but that would not be enough for Carolina. Andrew Copp scored soon after at 11:10 to seal a 4-1 victory for the Rangers.

Igor Shesterkin, a frontrunner for the Vezina Trophy, was spectacular in net for the Blueshirts. He saved 30 out of the 31 shots on goal for a save percentage of .968.

Facing a 2-0 deficit, the Rangers bounced back on their homestand and overwhelmed the Hurricanes in both Games 3 and 4.

The Hurricanes have yet to win a road contest these playoffs, with a 0-5 record outside of Raleigh.

Game 5 will return to PNC Arena on Thursday at 7 p.m. on ESPN.

In the Battle of Alberta, Edmonton was flying right out the gate scoring three unanswered goals.

21 seconds into the game, Ryan Nugent-Hopkins scored off a stickhandling blunder from Oilers goaltender Mike Smith.

Zach Hyman capitalized on a power play at 9:53 in the first period to make it 2-0. Evander Kane, coming off a hat trick in Game 3, scored with a minute remaining in the first to make it 3-0, a score that sent Rogers Place into a frenzy.

With all momentum against them, the Calgary Flames lit a spark and scored three goals of their own to tie the game.

Elias Lindholm opened up scoring in the second period at 9:04 on the power play. 36 seconds later, Mikael Backlund potted a goal of his own to make the game 3-2.

Midway through the third, Rasmus Andersson scored a short-handed goal on a flailing puck shot from the defensive zone to even the score at 3.

An anxious Edmonton crowd would eventually settle down following another goal from Nugent-Hopkins and an empty netter from Kane. The final horn sounded with the Oilers winning 5-3.

With a 3-1 series lead, the Oilers have an opportunity to advance to the Western Conference Finals for the first time since 2006 Thursday night at the Scotiabank Saddledome in Calgary. Puck drops at 9:30 p.m. and will also air on ESPN.