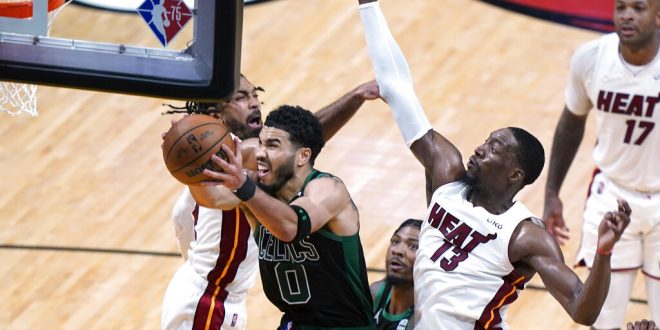 The Boston Celtics take game five of the Eastern Conference Finals after entering the night with momentum from Game 4.

The Miami Heat struggled without their star guard, Tyler Herro.

Herro has put up 37 points in 3 games for the Heat but missed out on games four and five.

The Heat really struggled without Herro’s three-point capabilities as Miami only shot 15% from beyond the arch.

Miami struggled in general on the offensive side as its top scorer, Bam Adebayo, only put up 18 points in the 93-80 loss.

The Heat was up five points at half-time in game five, but they didn’t hold on to it for long.

The Boston Celtics played a well rounded game five. They led in almost all major categories including field goal and three-point percentage, assists and turnovers.

On top of the team leading in multiple major statistical categories, the Celtics also led in all three major individual stats as well: points, assists and rebounds.

The Celtics look to end the heats season on Friday in game six, as Miami looks to stay alive.

The Heat could really use another superhuman performance from Jimmy Butler like they did in game one. In that game he scored 41 points, came down with nine rebounds and dished out five assists.

The Heat could also use Herro back in the line up. Herro’s 39% three point shooting could really put up some needed points for them.

For Boston, they are just one win away from their first finals appearance since 2010.

If Miami is still out major players, and with the return of Marcus Smart and Robert Williams, the Celtics will be looking up.