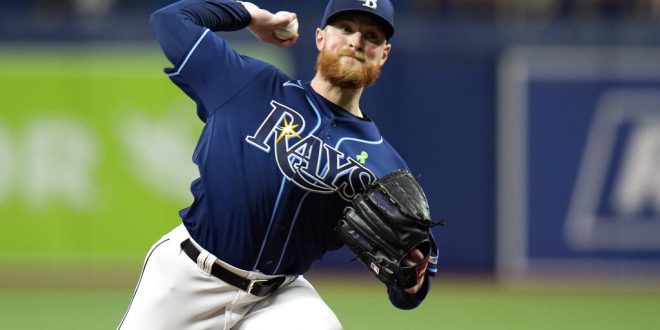 The Tampa Bay Rays escaped with a 5-4 win Wednesday to sweep the Citrus Series against the Miami Marlins.

The Rays won the opening game of the series 4-0. Centerfielder Kevin Kiermaier started the game off with a bang for the Rays. On the first pitch from Marlins starting pitcher Pablo Lopez, Kiermaier sent a line drive to centerfield. Jesus Sanchez dove for the ball and missed. Kiermaier raced around the bases for an inside-the-park homerun.

Kevin Kiermaier hits an inside the park homerun!

Harold Ramirez led off the second inning with a solo homerun for the Rays that snuck over the right field wall. It was the first homerun of the season for Ramirez. In the bottom of the sixth inning, first baseman Ji-Man Choi launched a two run homerun into right field. Tampa’s bullpen threw three scoreless innings to close the game.

Starting pitcher Shane McClanahan put in another strong performance Tuesday. The ace went six scoreless innings, allowing four hits, while walking two and punching out nine. He earned his fourth win of the season. The southpaw lowered his season ERA to 2.06 over 52.1 innings of work.

Marlins’ pitcher Lopez put in seven innings of work, allowing four runs and striking out eight. Despite the loss, Lopez has enjoyed a strong start to the season for the Fish. He is 4-2 with a 2.04 ERA on the season over 53 innings.

Tampa escaped with a 5-4 win Wednesday to sweep the Citrus Series. The Rays jumped out to a 5-0 lead in the first inning. A couple of doubles from Randy Arozarena and Wander Franco helped the Rays jump out to a 3-0 lead. Harold Ramirez then hit his second homerun in as many days for the Rays. His two-run shot would be the end of the scoring on the night for Tampa.

110 MPH and 25° off the bat. You can do the math for the result pic.twitter.com/lBXfVbBJYt

Later in the inning, catcher Jacob Stallings doubled to bring in two additional runs for Miami. In the ninth, errors by third baseman Taylor Walls and Franco led to Miami bringing the score to 5-4. Left-handed pitcher Colin Poche struck out desginated hitter Jesus Aguilar with the bases loaded to end the game.

Didn't have to be pretty as long as it's a #RaysWin pic.twitter.com/J8PZZPj1jo

The in-state rivals will face each other again on August 30 and 31 in Miami.