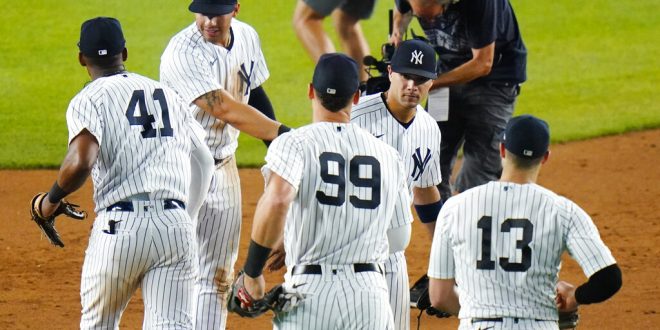 Historically MLB teams have used Memorial Day as a benchmark point in the season to see where they stand. As Memorial Day has come and gone this season, here are some of the biggest storylines:

Through Memorial Day weekend, a New York baseball team sits atop both the American League and the National League. There has only been one prior instance in MLB history when the Mets and Yankees both finished first in their respective leagues. (2006)

The Yankees currently hold the best record in the MLB at 34-15. A big part of the Yankees’ success this season has been their ability to hit the long ball. The Pinstripes currently lead the AL with 69 home runs, and right fielder Aaron Judge leads all players with 18 dingers this season.

Aaron Judge finished the month of May with 12 home runs.

Not far behind the Yankees, the New York Mets lead the National League with a record of 34-17. The Mets ended the month of May as the hottest team in the NL winning their last five games of the month. The Mets’ offense has been boosted by the dazzling play of slugger Pete Alonso this season. Alonso leads the NL in RBIs with 47.

The calendar may now read June, but Pete Alonso had a month of May to remember pic.twitter.com/4hPXZhHm4w

This season’s biggest disappointment so far has been none other than the defending World Series champions, Atlanta Braves. Through 50 games, the Braves have a record of 23-27 and sit 10.5 back of first place in the NL East.  However, it is worth noting that the Braves have been without sluggers Ronald Acuna Jr. and Marcell Ozuna for a majority of games so far this season.

After winning the AL Central in 2021, and an active offseason the Chicago White Sox had high expectations entering the 2022 season. So far the White Sox’s performance this season has been nothing but underwhelming. Chicago is currently 23-24 and five games back of the Twins for first in the AL Central.

Although the team as a whole has struggled, the one bright spot this season has been the play of shortstop Tim Anderson. In 40 games played, Anderson has the second-best batting average in baseball at .356. Unfortunately for the Sox, Anderson suffered a groin injury Tuesday and is expected to be sidelined for several weeks.

Prior to tonight’s series opener at Toronto, the #WhiteSox placed All-Star shortstop Tim Anderson on the 10-day injured list (retroactive to May 30) with a strained right groin and reinstated outfielder Luis Robert from the Covid-19 Related injury list.