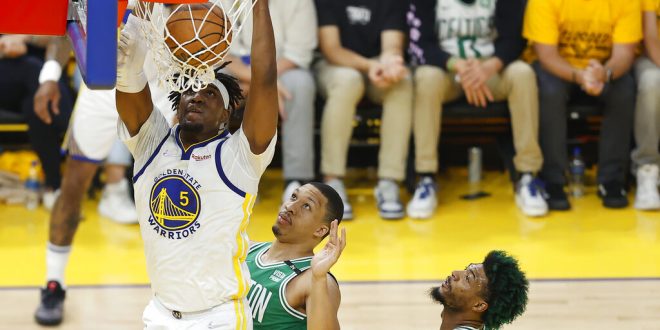 After splitting the series 1-1 in San Francisco, the Boston Celtics and Golden State Warriors meet in Boston for Game 3 of the 2022 NBA Finals on Wednesday. Golden State defeated Boston on Sunday 107-88 to tie the series after Boston’s 120-108 Game 1 win.

A 1-1 split in The Bay and now the series shifts to Boston!

Golden State comes into Wednesday’s matchup after a dominating 19-point win in Game 2. Stephen Curry scored a game-high 29 points on five 3-point shots. Jordan Poole added 17 points off the bench, including a half-court buzzer-beater to end the third quarter.

Despite the success of Poole and Curry, sharpshooter Klay Thompson has struggled through the first two games. In Game 1, Thompson scored 15 points but only hit 42.9 percent of his shots. Those numbers dipped in Game 2 with an 11-point performance, where Thompson shot 4-for-19 from the field.

Boston looks to bounce back in NBA Finals Game 3

Meanwhile, the Celtics look to rebound after a disappointing Game 2. Previously, Boston dominated Golden State 120-108 on the road to win Game 1, completing a 12-point fourth-quarter comeback.

Additionally, early inconsistent play by three of the Celtics’ stars has hurt Boston through the first two games.

Al Horford, who made his first NBA Finals appearance in Game 1, led the Celtics with 26 points on 9 of 12 shooting from the field in Game 1. However, Horford only managed 2 points in Game 2.

Additionally, Marcus Smart managed to put up similar numbers in the same games. In Game 1, Smart scored 18 points on 7-for-11 shooting, but he only scored two points in the Game 2 loss.

Finally, Jaylen Brown, who scored 24 points in Game 1, struggled in Game 2 with 17 points after only hitting 29.4 percent of his shots.

Despite the loss, Jayson Tatum shined in Game 2 with a 28-point performance that included six 3-pointers, both of which lead the Celtics. Tatum is averaging a career-high 26.9 points, eight rebounds and 4.4 assists in the 2022 postseason.

NBA Finals Game 3 by the numbers

This years NBA Finals, although tied 1-1, have not been close in final scores with the average margin of victory at 15.5 points.

With the series moving to Boston, most would expect home-court advantage for the Celtics, but that it not necessarily the case. Boston is 5-4 at home in the 2022 postseason, but Golden State has struggled on the road going 3-4. Additionally, the Warriors have won an away playoff game in 26 straight playoff series, which dates back to the 2007 Western Conference Semifinals. Golden State did not make the playoffs from 2008-2012 and 2019, and they only appeared in the play-in games in 2021.

Boston is favored by 3.5 points, according to ESPN’s PickCenter. Additionally, ESPN’s Basketball Power Index gives the Celtics a 80.5 percent chance to win Game 3.