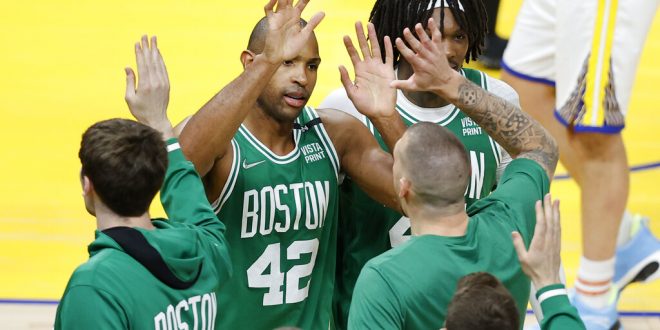 After being down 12 after three quarters, the Boston Celtics stormed back, with a big performance from Al Horford, in the fourth quarter to steal Game 1 of the NBA Finals in a 120-108 victory against the Golden State Warriors. The Celtics lead the series 1-0 for this best-of-seven series.

After trailing the game by 12 entering the 4th quarter, the Boston Celtics had 17 unanswered points, outscoring the Warriors 40-16 to steal Game 1 on the road. The Celtics hit the first seven 3-pointers behind Al Horford’s hot shooting to spark the comeback for the Celtics.

The Former Florida Gators basketball star made his NBA Finals debut in Thursday night’s game. He finished the night with 26 points, 6 rebounds, and shooting 9-12 from the field. Horford, 35, became the oldest NBA player in NBA Finals history to have six made 3-pointers. He celebrates his 36th birthday as he prepares with the Celtics for Game 2 Sunday night.

Main Takeaways for the Warriors

The Warriors looked strong for the majority of the game last night as they held a 12-point lead entering the 4th quarter. However, in the fourth, the Warriors went cold, shooting just 7-17 from the field, allowing Boston to run away with a 120-108 win at home.

Klay Thompson, coming off a big game in Game 5 of the Western Conference Finals, slowed down with 15 points, 2 rebounds, and 5 assists.

We pretty much dominated the game for the first 41, 42 minutes. So, we’ll be fine.

Green finished the night with just 4 points, 11 rebounds, and 5 assists.

One bright spot for the Warriors was Andrew Wiggins, who put up 20 points and 5 rebounds on the night. The team will look to him for strong performances as the series continues.

After struggling for most of the game, the Celtics were able to come back in the 4th quarter to steal Game 1 of the series behind strong performances from Al Horford and Jaylen Brown. Brown finished the game with 24 points, 7 rebounds, and 5 assists.

Celtics star Jayson Tatum had a quiet night as he struggled to score. Despite scoring just 12 points, Tatum set an NBA Finals record for 13 assists in his debut.

Marcus Smart finished the game with 18 points, 5 rebounds, and 4 assists. He had this to say about the Boston’s resiliency to come back in the game:

Game 2 of the NBA Finals will take place Sunday at Golden State. Boston leads the series 1-0.