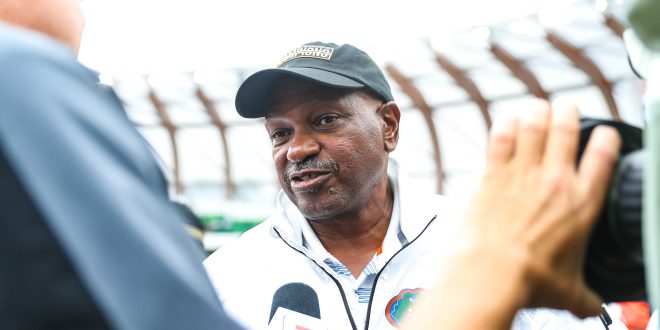 Mike Holloway became the coach of the Gators Track and Field team in 2008. The Gators won the 2022 NCAA Championship for both the men's and women's sides. (Photo from @GatorsTF on Twitter)

Head coach Mike Holloway knows how to win titles, set program records, and secure back, to back, to back championship wins.

His success with Florida Gators track and field has only continued with more history made in Eugene, Oregon, to cap off the 2022 season. Holloway has led Florida’s men’s and women’s teams to the 2022 NCAA Outdoor Championships, and for the first time in program history, both teams have earned the title at the same time. This season, the women were so dominant they swept both the NCAA Indoor and Outdoor championships.

Since taking over the program in 2002, Holloway has racked up 12 individual national championships, and 13 Southeastern Conference championships and has been named SEC Coach of the Year for men’s and women’s indoor and outdoor competition a combined eight times. Before taking over the Gators’ program, the Gainesville great graduated in 2000 with a bachelor’s degree in history from UF. He became the head track coach at Buchholz High School in Gainesville in 1985. He won eight state titles under his tenure.

Never straying too far from the Swamp, Holloway was determined to make greatness happen in the orange and blue and this season was no different. Holloway believes in the program he’s built, his supporting staff, and the performance of his athletes.

Success with the Women’s Team

When it came to the women, Holloway saw moments of success on Wednesday during qualifying. This encouraged his hopes of bringing home hardware.

On Saturday, the Gator women had what Holloway has coined a “Gator Hour”. A “Gator Hour” is when the team may be in the middle of the pack or not even on the scoreboard, but within 60 minutes, the program jumps ahead to be leading the meet. Talitha Diggs kicked off the power hour for Florida by besting her school record in the 400 meters. She crossed the line at 49.99 completing the indoor/outdoor sweep in the event and becoming the second NCAA Outdoor event title over 400 meters in program history.

With the women’s accomplishments and having celebrated their success after raising the most lucrative trophy in collegiate track and field, the Florida men were ready to be next.

Success with the Men’s Team

The Gator men scored 54 points through the three sprinting events (100m, 200m, and 400m) at Hayward Field and two relays (4×1,4×4). Joseph Fahnbulleh is the first Gator to win both the 100m and 200m titles at the same NCAA Championship meet. His 10.00 time in the 100m puts him in Olympic qualification. The men finished sixteen points above the second-place competitor in Texas.

Under Holloway, the key to winning a track meet is having every athlete buy-in. Track isn’t an individual sport but a team sport. It takes each individual earning points to walk away with a team title. Florida houses a family atmosphere that fights hard for one another. Holloway explains the culture and where it comes from.

It’s clear that Holloway’s vision has come to fruition. If Florida keeps on this track they’ll be more NCAA Championships in the future.

Fifth Time’s The Charm For the fifth time in program history, the Gators have trumped …