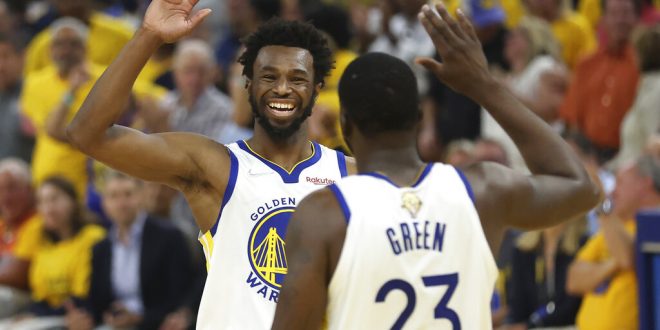 Andrew Wiggins led the Golden State Warriors to a 104-94 win against the Boston Celtics. The Warriors lead the series 3-2 and are one win away from capturing their fourth NBA title since 2015.

Wiggins Steps up for Golden State

Wiggins came up big for the Warriors. The former No. 1 overall pick scored 26 points on 12-of-23 shooting, including 13 rebounds, two assists, two steals, and one block to lead Golden State to a Game 5 win. He was also the primary defender of Celtic superstar Jayson Tatum. If the Warriors end up winning the series, this performance will be one of the most talked about reasons why. Wiggins discussed why he has enjoyed success with the Warriors.

Stephen Curry had an off-shooting night. After a historic game four performance where the guard dropped 43 points, Curry was quiet in game five. He scored 16 points and did not make a three-pointer. Despite this, other Warriors players stepped up.

Despite Tatum’s 27-point effort, the Celtics were unable to match the Warriors. Boston struggled from three to start the game. The Celtics started 0-8 from deep. They turned it around as they hit the next 12 threes in a row. Boston struggled in the fourth quarter, only scoring 20 points. This was the first time the Celtics lost back-to-back games since March. Turnovers were an issue for the Celtics in Game 5. The team turned the ball over 18 times, compared to six from the Warriors. The Celtics will need to clean this up if they are to come back and force a Game 7.

Celtics in the 4Q tonight:

The series has been back-and-forth up until this point. Boston took Game 1 120-108, behind Gator Alum Al Horford’s 26 points. Golden State won Game 2 in a 107-88 blowout to tie up the series. Game 3 went to the Celtics by a score of 116-100. Jaylen Brown, Marcus Smart, and Tatum, all scored 24 or more points in the game. Steph Curry carried the Warriors to a 107-97 Game 4 victory behind an incredible 43-point performance.