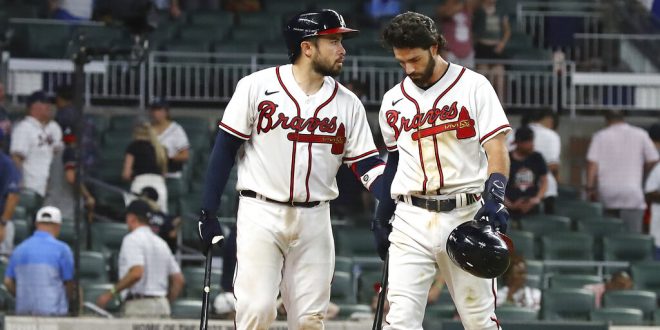 Atlanta Braves catcher Travis d'Arnaud consoles shortstop Dansby Swanson after he strikes out to end the game in a 5-3 loss to the Los Angles Dodgers during the 11th inning of a baseball game on Sunday, June 26, 2022, in Atlanta. (Curtis Compton/Atlanta Journal-Constitution via AP)

The Atlanta Braves travel to Citizens Bank Park Tuesday for the first of a three-game series against the Philadelphia Phillies.

Charlie Morton will take the mound for the Braves while Zach Wheeler gets the start for the Phillies. First pitch is at 7:10 p.m.

The Braves, 19-5, and the Phillies, 18-6, are two of just four teams in the MLB with more than 15 wins in June. That has found both squads in the running for the NL East.

The New York Mets have quickly found their NL East division lead getting smaller, in the midst of a 13-10 June.

Entering Tuesday, the Braves are just 5 games back from the division lead. Meanwhile, the Phillies trail slightly by more at 8 games back.

This hot stretch could not come at a better time for both teams after the Braves and Phillies ended the month of May with a losing record.

Kyle Schwarber, who leads the Phillies in home runs, has had himself quite a month as well. Schwarber clobbered 10 home runs in June alone, bringing his season total to 21.

Missing Stars for the Braves and Phillies

Heading into an important division matchup, both teams will be shorthanded.

Bryce Harper, the Phillies leader in batting average and runs batted in, hit the IL Sunday with a broken thumb. Harper left the Phillies’ matchup with the Padres Saturday night after a 97 mph fastball hit his hands.

On Tuesday, the Phillies announced that Harper would need to undergo surgery for the broken thumb. However, they are hopeful he will be able to return in six weeks.

On the other side, the Braves will be without Kenley Jansen and likely Ronald Acuna Jr.

Jansen was sent to the 15 day IL Tuesday due to an irregular heartbeat, while Acuna Jr. is currently listed as day-to-day after hitting a foul ball off of his foot Saturday.

The #Braves today recalled RHP Jesús Cruz to Atlanta and placed RHP Kenley Jansen on the 15-day injured list with an irregular heartbeat, backdated to June 27.

With some of baseball’s biggest names missing at least part of the series, both teams will need some other names to step into larger roles.

For the reigning World Series Champion Braves, that should not be too difficult as their home run, batting average, and RBI leaders will all be in the lineup in the likes of Dansby Swanson and Austin Riley.

The Phillies will have to look a little further as Harper leads the team in batting average and RBIs.

Odubel Herrera, who is 6-of-11 against Morton in his career, may need to fill the absence of Harper, as they will not have a single hitter batting over .300 in the starting lineup Tuesday.