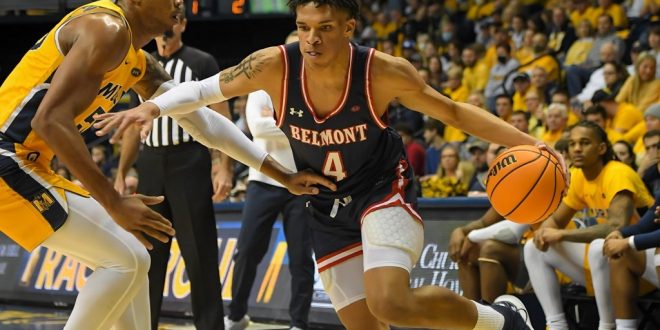 Florida Gators basketball head coach Todd Golden and his staff were very busy this offseason. They brought in four players through the transfer portal in their pursuit to rebuild the program, including LSU’s Alex Fudge, St. Bonaventure’s Kyle Lofton and VMI’s Trey Bonham. Another recruit that Golden and his staff picked up is former Belmont University guard Will Richard. He spoke to reporters to discuss his NCAA journey so far, the chip he still carries on his shoulders and his excitement about joining the Florida Gators basketball program.

Despite only being a freshman, Richard played a big role for the Belmont Bruins. The guard from Fairburn, Georgia, averaged over 27 minutes per game, 12 points and six rebounds. His performance helped Belmont place second in the Ohio Valley Conference standings, finishing with a 15-3 OVC record and a 25-8 overall record.

After his freshman season, he went from a 3-Star recruit out of high school to a 4-star recruit in the transfer portal.

Chip On His Shoulder

Richard had major interest from teams in the transfer portal. Some other teams that showed strong interest in the 6’5” guard were Georgia Tech, Wake Forest and South Carolina.

When coming out of high school, however, Richard was not as hot of a commodity, only being a 3-Star recruit at the time. He talked about how he used that as a chip on his shoulder to show teams why they should have never overlooked him, and he plans to still keep that in mind when he plays for the Gators this season.

The Gators had a lot of competition when it came to picking up Richard. He talked about what drew him to Florida and the pitch they gave to him.

He also discussed the role the Gators expect him to play starting this season.

Richard’s Excitement for his New Teammates

He was specifically asked about his thoughts on playing with fellow transfer Alex Fudge. He sounded very excited to play with the former LSU Tiger and was impressed with his size and talent.

This Gator team will look a lot different from seasons prior with a new bench boss and fresh faces, but the players are sticking with the process and are excited about the future of the program.

Journalism student at the University of Florida. Contributor for WRUF and WUFT. You can reach Aileyahu at a.markellshanes@ufl.edu or 786-316-5878.
@a_shanes10
Previous Gators Basketball SEC Opponents Announced
Next Thomas Haugh’s Gator Dream Comes True