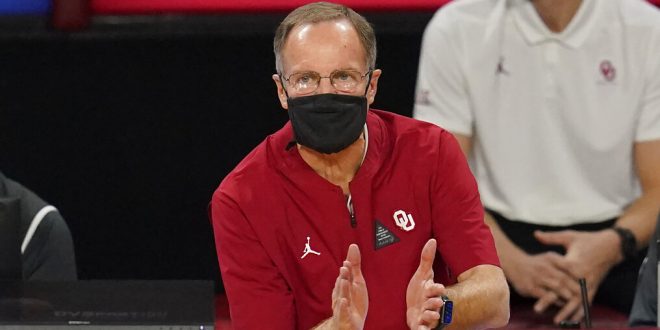 Oklahoma coach Lon Kruger applauds from the sideline during the second half of the team's NCAA college basketball game against Kansas State, Tuesday, Jan. 19, 2021, in Norman, Okla. (AP Photo/Sue Ogrocki)

Former Florida men’s basketball coach Lon Kruger will be inducted into the National Collegiate Basketball Hall of Fame after being named on Wednesday. He will join eight others in the HOF class of 2022.

Kruger ended his coaching career with a 674-432 record and coached for six different schools. Although Kruger had his longest-tenured run with the Oklahoma Sooners from 2011-2021 before retiring, he will become the first OU coach inducted into the College Hall of fame. Kruger also played for Florida from 1990-1996 and received two SEC Coach of the year awards there (1992,’94). Additionally, he led the Gators to their first Final Four appearance in 1994. As well as received the John R. Wooden Legends of Coaching Award in 2019 and the National Association of Basketball Coaches (NABC) Metropolitan Award for long and outstanding service to men’s college basketball in 2017.

Honored is one of the best ways that can describe how he feels after being named into the Hall of Fame.

“Very honored to join those who have already been inducted into the National Collegiate Basketball Hall of Fame,” Kruger said in a press release. “Any time a coach receives the honor, it is a result of the people that surround him. From players, staff and coaches and so many people through the years, it has always been about the relationships.”

Credits the People Around Him

Undoubtedly, Kruger has accomplished tall heights in his career and has made huge impacts on many teams. He will not take all of the credit for his success. Kruger explains more in a press conference how important the people around him were in his journey as a coach.

“Everyone who has been a part of this journey should feel some ownership in it. All of the terrific people that we have worked with in 47 years of coaching helped make the journey remarkable. Every stop that we have made, there were good people who were unbelievably helpful and supportive.”

The Induction Ceremony will be on Nov. 20 in Kansas City.