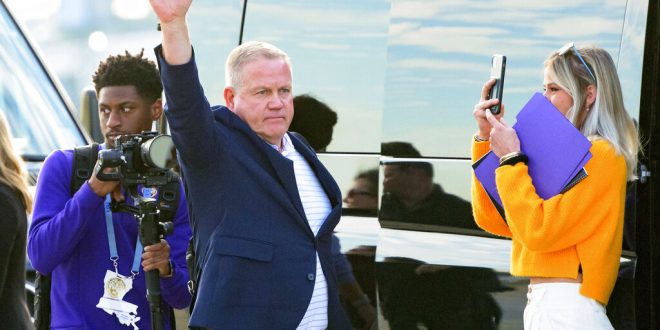 In December, Brian Kelly, Notre Dame’s winningest coach in program history left South Bend to take the reigns at LSU. Kelly accepted a 10-year deal worth $9.5 million per year along with incentives to be Ed Orgeron’s successor. On the first day of SEC Media Days, Kelly was able to discuss his vision for the program.

Kelly felt the move was the right one for him and his family.

“The right time at the right place,” said Kelly.

LSU Athletic Director Scott Woodward has earned a reputation throughout the league for making big-name hires. Woodward was the one who convinced Jimbo Fisher to leave Florida State for Texas A&M and hired Chris Petersen from Boise State when no one believed he would leave.

It is no surprise Woodward went after Kelly, the surprise was Kelly entertained it. Kelly is the first Notre Dame coach in more than 100 years to leave for another college job on his own will, leaving a program where has accumulated 113 wins since 2010 with the Fighting Irish .

“The challenges of being in the greatest conference in college football, along with being at LSU… is a great opportunity to restore championship level football here at LSU,” said Kelly.

Kelly discussed during his first SEC Media Day the importance of being able to play on the biggest stage each week in college football. He was able to touch on the fact he has never played in SEC caliber stadiums and it is an obstacle he is looking forward to.

There is no definitive answer at quarterback as of yet for Kelly despite having a plethora of skill players and a strong defensive unit. Arizona State transfer, Jayden Daniels, seems to have the slight edge over the rest of the room thanks to his running abilities, although his passing ability showed flaws during the Spring game.

The Brian Kelly regime will begin when the Tigers host Florida State for a week 1 marquee matchup.