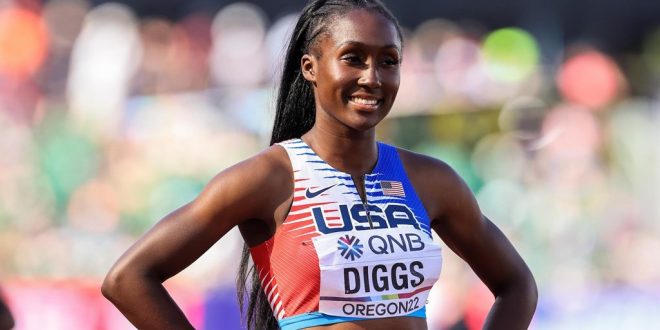 Talitha Diggs at the 2022 World Championships. Photo courtesy of FloridaGators.com.

The Gators found great success this weekend at the 2022 World Track and Field Championships. This weekend saw four current and former gators medal with three of them being gold.

This year’s Gators track and field team has been nothing short of historical, with the Mens and Womens teams winning the National Championship.

This past week saw 17 current and former track and field athletes represent the University of Florida and their respective countries at the 2022 World Track and Field Championship in Eugene, Oregon.

Talitha Diggs ran the 4×400 relay this past weekend and had the fastest opening leg out of the entire field, giving a great advantage to the USA.

With Diggs’s fantastic start, she and the USA cruised to victory in the Womens 4×400 Relay.

Diggs has been unstoppable this year and now has a national championship and a gold medal.

At just 19 years old, this is a stellar start to a career.

Champion Allison won gold as the anchor leg in the 4×400 and helped the USA win comfortably down the stretch.

This year he has done a clean sweep winning the 4×400 in the SEC, NCAA, and World Championships.

The last gold from a gator this weekend was from Grant Holloway.

He is now the back-to-back winner in the event.

Anna Hall had historic 2022 world championships capturing the bronze in the Heptathlon.

Hall is the first American woman to medal in the event since 2001.

With Hall being only 21, no one has seen an American medal in the Heptathlon since the year Hall was born.

The Gators won both NCAA Team Titles in June!

Followed that up with this @WCHoregon22 performance:

Hall is also a finalist for the Bowerman, which is given to the most outstanding track and field student-athlete

Another standout this week was Joseph Fahnbulleh.

Fahnbulleh made his debut in the world championships and got 4th in the 200 meters.

Fahnbulleh is emerging as one of tracks brightest young stars.