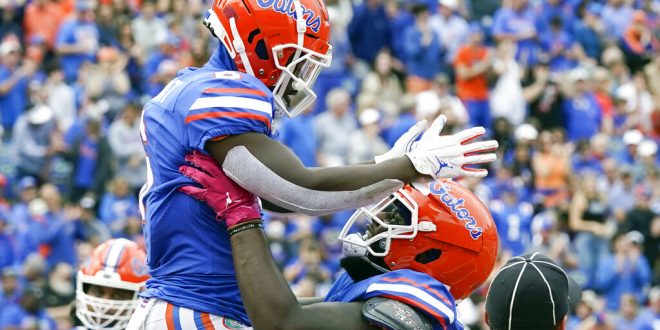 The Florida Gators men’s and women’s basketball teams head to Charlotte in December to participate in the inaugural Jumpman invitational event. This event features teams from the original Jordan Brand schools: Florida, North Carolina, Oklahoma and Michigan. The matchups are set as both Gator teams prepare for the Oklahoma Sooners. The men under first-year Head Coach Todd Golden play on December 20 at 9:30 p.m. The women play the following day, December 21, at 9:30 p.m.

Rising Sophomore Gator Gymnast Leanne Wong is returning to Elite Competition on Saturday. In her freshman season, Wong gathered eight All-America honors on her way to taking the SEC Balance Beam title. She will compete in the U.S. Classic 9 months after taking World Championships all-around silver in her last Elite Competition. Following the U.S. Classic, she will compete in the U.S. Championships on August 19 in Tampa.

Florida Gators running back Nay’Quan Wright has been named to the watch list for the Wuerffel trophy. Established in 2005, the player that represents the greatest mix of community service and achievement on and off the field is awarded the trophy. Wright now sits on two preseason watch lists. He initially joined the Doak Walker watch list which honors the nation’s best running back.

Gator golfer Fred Biondi sits atop the preseason PGA Tour University Velocity Global Class of 2023 rankings in the number one spot. The rising senior had an outstanding junior season which led him to the preseason rankings. Last season, Biondi went undefeated in match play in the SEC Championship with a 2-0-1 record. He appeared in Florida’s lineup a career-high ten times and was the top performer six of those times. Biondi tied for 20th at the National Championships last season.

The summer is getting ready to come to a close, and there is a lot to look forward to in Gator sports this upcoming athletic season.