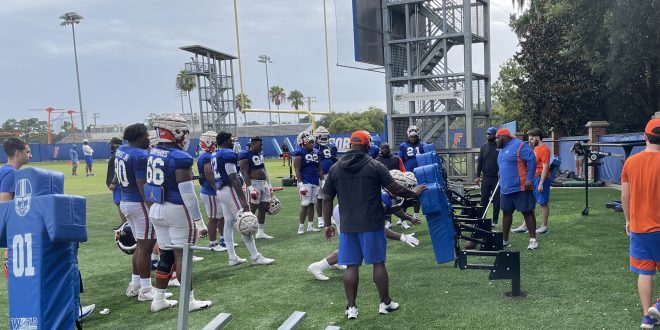 Thursday marked the seventh day of fall camp for the Florida football team. As they inch closer to the home opener against Utah, they will be hoping to improve last year’s defense in a number of ways. Here are some quick observations from Thursday’s practice.

One of the biggest questions surrounding this Florida defense going into the first week will be depth along the defensive line. However, the talent of the guys in the group right now should not go unnoticed. Last week, Co-Defensive Coordinator Sean Spencer had the chance to talk up his guys and how impressed he was with them.

During the viewing period on Thursday, Spencer worked with his unit on multiple things including explosiveness from the jump. Here you can see freshman Chris McClellan with a big, energetic burst on this rep during the drill.

@SpenceChaos seen here coaching up his defensive line. Big-time freshman @ChrisDMac10 seen in this rep exploding towards the target. pic.twitter.com/N4ciqCTEVO

In addition, Spencer also worked with defensive linemen Tyreak Sapp, Justus Boone and Andrew Savaiinaea among others on dropping back into coverage from the edge position.

He also worked with some of the others edge rushers such as @A_Savaiinaea on dropping back into coverage. pic.twitter.com/2T90b0N6bT

Coach Bateman and His Inside Linebackers Unit

During Thursday’s viewing period, Inside Linebackers coach Jay Bateman started his guys with a drill focused on attacking the gap with pace and wrapping up the ball carrier upon contact. To no surprise, Ventrell Miller led this group in the drill. We also saw Scooby Williams, Diwun Black, Derek Wingo and Shemar James go through this drill. This group will be interesting to watch as the season approaches.

@CoachBateman working with his ILBs. In the rep you’ll see @officiallscoob , who will look to earn some quality playing time in the upcoming season for the Gators. pic.twitter.com/W0kyX1OSTe

However, a notable omission from this group on Thursday would be Amari Burney. Burney had been wearing a non-contact jersey during the viewing period.

Toney and Raymond Working With the Defensive Backs

For the safeties and cornerbacks, they were seen working on their footwork and zone defense among other drills. While working on their zone, coaches Patrick Toney and Corey Raymond were making sure the players were in their correct spots and reading the routes thrown at them.

When it came to the defensive back’s footwork, freshman Kamari Wilson decided to have some fun by showing his ability to snag the ball one-handed.

From Inside The Gators and ESPN Gainesville’s writer Cam Parker, he showed footage of a great catch from Wilson.

There did happen to be one player missing from the group today and working with the trainers. This player would be possible projected starter Jason Marshall Jr.. He wore a non-contact jersey during Thursday’s viewing period.