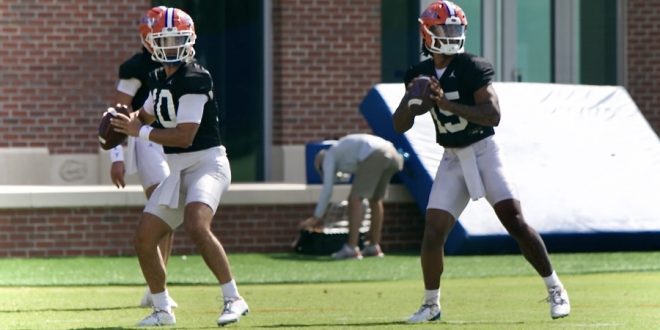 The Florida Gator football team returned to practice on Monday for their 10th day of fall camp under new head coach Billy Napier. Below are observations from the media viewing portion of practice with a focus on the offensive side of the ball.

Wide receiver Trent Whittemore shared how the excitement and the urgency the team is building as the season approaches. The Gators will play Utah in their season opener on September 3.

With the prime time game right around the corner, the Gators are putting their everything into each practice at fall camp. “Practice 10 to 15 is going to be very competitive for our football team,” Napier said.

“We’re excited to be in the national spotlight week one. These are the games you dream about growing up.” – @trentt_whitt on playing prime time pic.twitter.com/o2OtBeZmqw

Gator Nation will definitely be seeing a lot of Whittemore and Jackson as they are expected to be in the rotation this season. Whittemore spoke on how the two both formerly played quarterback in high school and how this experience continues to influence their performance at the receiving end.

Meanwhile, Ricky Pearsall remained on the sidelines in a non-contact jersey. Pearsall suffered a bone bruise in his left foot and is day-to-day. The Arizona State transfer was quick to impress teammates and media alike during the early part of fall camp. Pearsall has been observed without a boot the past two practices. Pearsall was seen stretching and riding the stationary bike on Monday. Whittemore complimented Pearsall’s wisdom and skill and added how “he definitely gives us a spark.”.

Additionally, Ja’Markis Weston was dressed in a non-contact jersey while working with director of player athletic development Joe Danos. Weston was also observed riding a stationary bike on the sidelines.

During Monday’s media availability, Napier evaluated the performance of the quarterbacks during Florida’s first fall scrimmage.

The quarterbacks were definitely putting the work in during Monday’s practice. Starting quarterback Anthony Richardson and backup Jack Miller III got off to a great start with accurate completions during drills. As the viewing period continued, Napier demanded precision from the quarterbacks as a few mistakes were made and a throw by Richardson on a corner was asked to be repeated.

Whittemore spoke on the progression he has seen with Richardson. “I think he’s grown just from a QB standpoint of reading the field and delivering really great balls. I think he’s grown in a lot of aspects and I’m really excited to see what he does in the fall,” Whittemore said.

Meanwhile, Max Brown and Kyle Engel were seen taking reps alongside Richardson and Miller. Jalen Kitna was not observed on Monday. The redshirt freshman had a small procedure last week for an undisclosed injury that has kept him from camp for seven practices.

Dante Zanders stood out among the tight ends during Monday’s viewing period. The tight ends were observed working on blocking technique with tight ends coach William Peagler. The players paired up with one partner simulating a rusher while the other worked on blocking. It was the first time the tight ends had run this specific drill.

Additionally, tight end Arlis Boardingham was observed in a non-contact jersey with a sling on his right arm. His injury is unknown. Monday’s viewing period marked the first practice he has been seen wearing the sling and not participating.

Napier spoke on his growing confidence in Florida’s offensive line as well as the current competition at the position.

Additionally, Ethan White returned to unlimited participation during Monday’s viewing period. White was wearing a non-contact jersey for the first time on Friday and was out on Saturday for Florida’s first fall scrimmage.