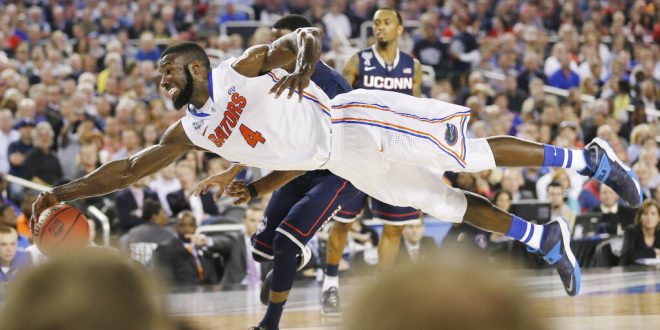 In an athlete’s career, injuries are nothing new. Former Florida basketball star Patric Young, who helped lead the Gators to the 2014 Final Four, is no stranger to that after suffering multiple knee injuries playing professional basketball overseas. However, Young’s greatest battle came this summer.

On the night of June 29, while driving through Nebraska, the former SEC Defensive Player of the Year suffered a single-vehicle accident that left him paralyzed from the waist down. Young recently joined Steve Russell on Sportscene to discuss the accident, his injury and his recovery.

Young said he was unaware of his surroundings due to darkness when he approached a highway intersection. His first instinct was to try to get off the road to avoid any potential cars on the highway.

After flipping his vehicle, Young was able to reach his phone and call a friend who was driving behind him. According to Young, his friend couldn’t tell an accident had occurred due to the darkness in the area.

First thing I want to say is Praise God for life! My accident was no surprise to God and I will continue to praise Yahweh everyday of my life. The love and support I’ve received from everyone has been tremendous. I’m currently in South Dakota (got to see Cody Larson ❤️)

After receiving treatment at a trauma center in South Dakota, Young moved to Denver for the bulk of his immediate rehab. For the three-time SEC champion and two-time All-SEC member, there are comparisons between rehabbing and playing college basketball. Mainly, he said appreciated the staff and his doctor, Dr. Jeffrey C. Berliner, for not making the environment feel like a hospital.

He said the interactions show how genuine the staff is, similarly to a basketball staff recruiting and coaching a player. It motivates him to want to work harder and try to get better every day.

Despite that motivation, Young admits that there are some days that are still hard. But the goal to get better doesn’t change.

Throughout Young’s recovery, constant support on his side has come from his now-wife Whitney Abbot and his step-daughter Kyla.

Young first met Abbott during his first year at the University of Florida, but the two didn’t date until later in college. After some time, she became pregnant and finished school, and Young went overseas to play professional basketball.

“In 2018 when I was in Atlanta rehabbing my knee in hopes of returning to basketball, Whitney came to visit me for a few days,” Young wrote in his wedding registry. “Her visit started well but ended terribly after I was still non-committal on what we were doing and where we were going as a couple. To fully grasp the severity of my immaturity in the summer of 2018, let me say that Whitney and I did not speak again until May of 2021.”

After reaching out to Abbott via Facebook Messenger, the two reconnected after some time. Young proposed to her in January during a trip to Paris, and they planned to marry in Omaha, Nebraska, July 8.

Plans changed for the family, but the spirits wouldn’t be deterred. Abbott and Kyla joined Young in Denver for his treatment and training. Eight days after his accident, Young and Abbott got married.

Made it to Denver everyone. So happy that my family could meet me here as well! pic.twitter.com/dybSV2krav

This support system extends to his SEC Network and ESPN family, Billy Donovan and Gator nation as a whole, who Young said he’s incredibly thankful for.

As Young adjusts to his new life, he said his career won’t change. Young joined the SEC Network as a studio host and broadcaster in September of 2021 and looks to continue that role for the upcoming 2022-2023 season.

“I look forward to covering a few games this year,” Young told Russell.

Health-wise, Young said knows his life is not over, and he’s in a place to inspire people.

Cam is a fourth-year broadcast journalism sports and media major at the University of Florida. In addition to writing and recording radio trendings for WRUF, Cam covers North Florida HS football for The Prep Zone and Mainstreet Daily News and UF football and basketball for Inside the Gators.
Previous Coleman, Saints Hope to March in Opposite Direction
Next Pat Dooley’s High Five (August 25th)