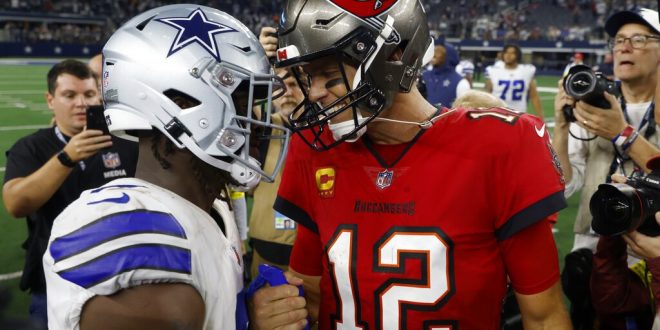 After a tumultuous off-season involving a slew of personnel changes and retirements, the Buccaneers silenced doubters (temporarily, at least). Tampa Bay took down the Cowboys 19-3 Sunday night in Texas in its season opener.

FINAL: @TomBrady and the @Buccaneers start the season with a primetime victory. #TBvsDAL pic.twitter.com/idx8cS26tq

Despite the tension and uncertainty surrounding the team, the franchise continued to rebuild and fill holes where needed. To make up for the sudden-exit of Antonio Brown, the Buccaneers added another future Hall of Fame receiver, Julio Jones. They designated Pro Bowler Kyle Rudolph as Gronkowski’s replacement, while signing Akeim Hicks to fill the void left up front by Suh. Although there were many moving parts this off-season, one can argue the Buccaneers actually improved.

Stopped In Their Tracks

After marching down the field and booting a field goal in their first drive, the Cowboys were just scratching the surface in terms of offensive production. This was not the case, as that first quarter field goal was the only points the team scored throughout the contest.

The deadly linebacker trio of Lavonte David, Shaquille Barrett and Devin White denied Dallas from making much progress. White clogged all running lanes left open by his defensive line, assisting in holding running back Ezekiel Elliot to just 52 yards, while Barrett was formidable off the edge and as a pass rusher. Lavonte David continues to excel in coverage, his understanding of a variety of zone defenses and techniques provides him with an advantage that most linebackers don’t have.

Defensive backs Carlton Davis and Antoine Whitfield Jr. make up one of the league’s best defensive backfields, living up to that label on Sunday. Whitfield hauled in an interception, while Davis held Cowboys star Ceedee Lamb to just two receptions and 29 yards. Veteran addition, Logan Ryan was all over the field, finishing with five tackles.

Getting The Ball Rolling

The Buccaneers surprised many by signing Jones, who some consider to be the best receiver of his generation. After an injury-plagued season in Tennessee last year, Jones reportedly adopted a new diet and training regimen. Jones hauled in three passes for 69 yards, including a 48-yard snag. The former All-Pro also received two handoffs, one turned into a key red-zone first down.

The decision to resign running back Leonard Fournette is proving to pay off. The LSU product rushed for 127 yards on 21 carries, averaging six yards per rush. Off-season addition Russell Gage only caught two passes but is expected to have a larger role after hauling in 66 passes last season.

Despite suiting up on Sunday, star receiver for the Bucs Chris Godwin is still nursing a hamstring injury. The Buccaneers will take on division rival, the New Orleans Saints Sept. 18 at 1 p.m. The Saints are coming off an encouraging win over the Atlanta Falcons 27-26.

Tyler Carmona is a junior journalism major at the University of Florida. Originally from Miami, Tyler played football as a wide receiver at the University of St. Francis before transferring to UF.
@@TylerCarmona
Previous Yankees Dominate Rays on Consecutive Nights Gaining 5 ½ Game Lead in AL East
Next Champions League Group H Preview

The Tampa Bay Buccaneers pulled out a fourth quarter win over the Saints Monday night, …