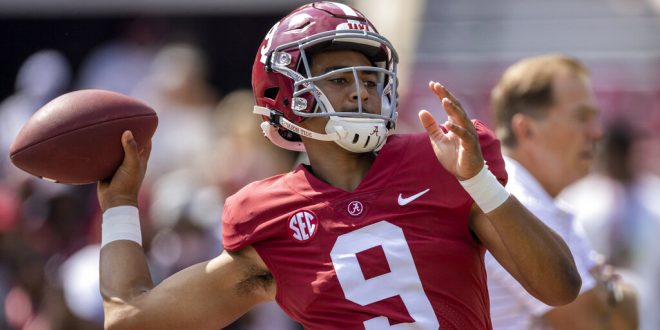 With under two minutes to play last weekend at AT&T Stadium in Arlington, Texas, sophomore Arkansas kicker Cam Little lined up a go-ahead, 42-yard field goal from the left hash. But Little’s kick doinked the right upright en route to No. 17 Texas A&M prevailing over the No. 20 Razorbacks, 23-21.

“The sad thing is we lost, and the great thing is we’re not used to it,” Arkansas head coach Sam Pittman said. “That was only two losses in the last 10 games.”

The Hogs will return to rebound this Saturday as they prepare to host No. 2 Alabama. The Crimson Tide enter their first SEC-west matchup 4-0 overall. The Tide are off to a 1-0 start in conference play after they trounced Vanderbilt 55-3 last weekend in Tuscaloosa.

The Razorbacks enter the contest with a 1-1 conference record after they defeated South Carolina at home in week two. Arkansas is giving up just over 300 passing yards per game this season — sixth most in the nation.

“Bryce Young, it [he’s] possibly better than [he] was last year, he is on tape,” Pittman said.

The Razorbacks are led by junior quarterback KJ Jefferson and boast a top-10 rush attack in the country (243.8 yards per game). Jefferson led Arkansas with 105 yards on 18 carries last weekend against Texas A&M and found the end zone for the fourth consecutive game to begin the season.

“You can’t minimize the effectiveness of [Jefferson] as a passer,” Saban said. “He’s got a strong arm, throws the deep ball well, and [Arkansas] makes a lot of explosive plays because they run the ball extremely well — they have play-action passes — but he executes it both ways very very well.”

Alabama boasts the nation’s second-best total defense and third-best scoring defense. Through four games, the Crimson Tide are allowing the fewest yards per play (3.3) in the country.

Junior edge rusher Will Anderson Jr. leads Alabama’s defense with four solo sacks and caught their only interception so far this year.

Despite Alabama’s blowout win against Vanderbilt, Saban said his team still has areas for improvement.

“We need to show that we can sort of build on this and show progress as a team individually and collectively,” Saban said. “This is a very dangerous team in Arkansas . . . coming off a tough loss.”

Saturday’s kickoff is scheduled for 3:30 p.m. and the game will air on CBS.

Hi, my name is Griffin Foll and I am currently a senior at UF studying sports media journalism with a concentration in political science. I contribute weekly web and radio content for WRUF ESPN Gainesville and help cover the World Cup/Champions League soccer beat. Be sure to check out some of my recent articles!
Previous NL East Race Mets vs Braves
Next LSU and Auburn Football Teams Meet in SEC Clash Saturday Night