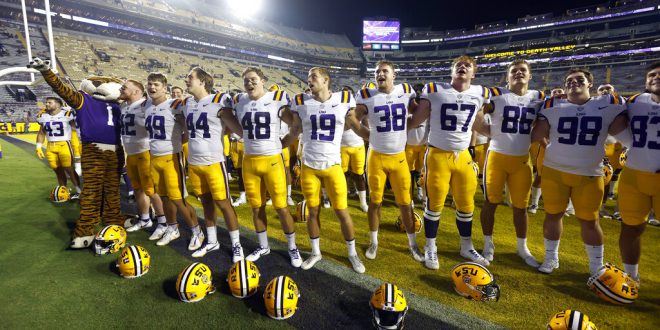 This Saturday, the No. 8 Tennessee Volunteers will be heading down to Baton Rouge to compete against the No. 25 LSU Tigers.

Having a week off from competing has really provided Tennessee with a lot of time to work on their technique. This will be Tennessee’s first time traveling to LSU since 2010, and the team is ready to compete in this upcoming game.

The way that Tennessee practices allows all members of the team to continue to develop. This will play an important part in the matchup for them. Tennessee head football coach Josh Heupel said there is always room for improvement for the team, and that the team always has to be prepared.

Heupel also talked about how the quarterbacks for both teams have a lot of talent. They are both very efficient with how they handle the ball, which makes this such a good matchup. He also discussed how both are very mature and know their way around this game well. This will become very important for both teams this weekend.

Tennessee is confident in their game and trust their players to put themselves in a position to win.

Currently ranked No. 25, Louisiana State is ready and excited to take on a top 10 team in their home stadium. Brian Kelly, the head football coach at LSU, talked about how talented of a team Tennessee is. From offense to defense, Kelly compliments Tennessee’s coach on the work he has done for them.

After last week’s game, Kelly said Greg Brooks is a really valuable piece for their team. After a game changing play against Auburn last week, Kelly said he has a lot of confidence in Brooks as a player. Being a senior and an experienced SEC football player, Brooks has really been able to change the game for LSU.

Hendon Hooker does pose a threat to the defense of LSU. His speed and size are something that makes him a highly accurate quarterback in the game. Kelly said he is a double threat because of this. Having to go against a player like this is something that LSU is really going to have to watch out for and is going to need to be highly accurate moving forward with their plays.

LSU is ready to take on rival Tennessee with the excitement of playing another SEC team.

The game is set for Saturday at noon.

Meg Matthews is a Junior at the University of Florida, studying Sports Journalism.
Previous Gators Soccer hosts No. 9 Arkansas
Next Rays take on Guardians in AL Wild Card