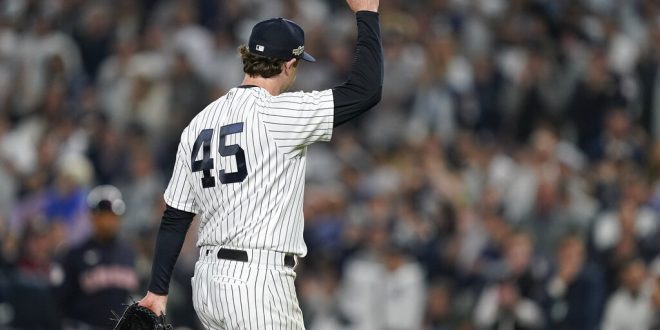 The New York Yankees beat the Cleveland Guardians in Game 1 of the American League Divisional Series last night by a score of 4-1.

Cleveland finished the year with a 92-70 record, which was good enough to win the AL Central. The Guardians swept the Rays 2-0 in the Wild Card round and moved on to face New York.

New York finished the year with a 99-63 record. The Yankees won the AL East and had the second-best record in the American League, which earned them a bye in the wild card round and five days off.

The time off didn’t leave any rust for the Yankees as they secured the Game 1 win.

Cole is the Ace the Yankees paid for

In December of 2019, the Yankees decided to make Gerrit Cole a $324 million dollar man. The team needed an ace and Cole fit the billing. New York wanted a pitcher they could rely on to win big games for them in the postseason. Cole proved why the Yankees made him the highest paid pitcher in baseball last night.

It was his first home playoff start in the Bronx and he shoved. His 6.1 innings and eight strikeouts got him the win.

The third inning was the best opportunity for the Guardians to put runs on the board. In this inning, Cole allowed his only run of the game on a solo shot to right field to put the Yankees down one early. The Guardians kept on the attack in the third, manufacturing a bases loaded situation with one out. Cole then got a groundball force-out at home for the second out, and a strikeout to strand all runners.

Aside from the threat in third, Cole continued to cruise, and the Yankee offense supported their ace with four unanswered runs.

Cole’s career playoff ERA is now 2.93 in 258 innings pitched. When the playoffs come around, Cole shows up, and he is proving that won’t stop in his Yankee tenure.

Cleveland has played 33 innings of baseball in this year’s MLB postseason. In these 33 innings, they have scored four runs in total. In their series with the Rays, the Guardians won back-to-back pitchers duels. The score of Game 1 was 2-1, and Game 2 was a 15-inning marathon where Cleveland won with a score of 1-0.

The Guardians can compete in any game with their dominating pitching. Their staff is headlined by Shane Bieber and Triston McKenzie, who both posted a sub-3 ERA on the season. The reality is it will be hard to beat this Yankees team without scoring runs. The Yankees matched the Guardians postseason total of runs just in last night’s game alone.

Granted, Cleveland has faced three dominant pitchers in Shane McClanahan, Tyler Glasnow and Cole. However, it doesn’t get any easier as they go up against Nestor Cortes in Game 2. Cortes is an all-star and had 2.44 ERA this year.

The ALDS is a best of five series. This game is pivotal for the Guardians as being down 0-2 is a tough hole to dig out of. They lost Game 1, but the sky isn’t falling just yet. Bieber, Cleveland’s ace, will take the mound in Game 2. Throwing their best just at the right time.

As mentioned before, Cortes will be on the bump for the Yankees. The series has gone exactly how New York planned.

Wil the Yankees keep the Bronx rocking? Or will Bieber outshine the bright lights of New York?