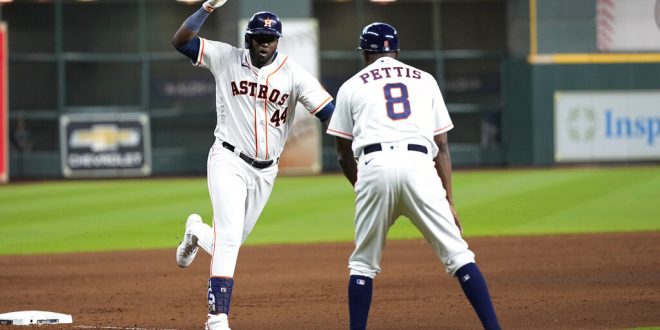 The Houston Astros played from behind for eight innings in Game 1 of the American League Division Series until they were down to their final out. With two outs in a 0-1 count in the bottom of the ninth inning, Yordan Alvarez blasted a three-run home run off Robbie Ray to walk off the Mariners and take Game 1.

Logan Gilbert started on the mound for the Mariners while Justin Verlander made his 32nd career start in the post season for the Astros.

Eyes on the prize. #Postseason pic.twitter.com/NMSY9HMRY9

Familiar for the Astros, new for Seattle

The Mariners didn’t look like a playoff contender to begin with, showcasing a young roster on opening day. After starting out 29-30 and winning 14-straight games from July 2-17, their playoff drought seemed like it had a chance to come to an end.

Seattle acquired Luis Castillo in a trade with the Reds to add to their pitcher depth on July 30. Three months later, they swept the Blue Jays in the American League Wild Card series to end their 20 year postseason drought.

The Astros on the other hand have had four 100 plus season wins in the last six years. They have won six straight post seasons, five consecutive ALCS appearances and won the World Series in 2017.

This scene was nothing new for Verlander. He is 14-11 in his 32 postseason starts with a 3.62 ERA and records 208 strikeouts in that time on the mound.

However, location struggles appeared as Verlander took the mound in Game 1 against Seattle. He pitched six straight balls after his first pitch was fouled and walked Julio Rodriguez to start the game. Ty France followed with a single to put runners on the corners, and Seattle scored the first run in the game off a Cal Raleigh RBI single.

The Mariners extended their lead in the second inning, scoring three more runs to give them a four run lead. Back-to-back singles by Adam Frazier and Jarred Kelenic led off the second and a double to deep right by Julio Rodríguez brought in both baserunners. Ty France brought in another run on a single to extend their lead 4-0.

Houston recorded their first runs of the game in the bottom of the third inning. Chas McCormick led off with a single to right center, advancing to second after Jose Altuve walked. Yordan Alvarez brought in the Astros two runs on a double to left, cutting the Mariners lead in half.

Seattle was in the drivers seat the whole game and added two more runs to their lead in the fourth. Verlander’s night would be done after this inning. A home run by J.P. Crawford and a France double scored Rodriguez after he tripled, making the score 6-2.

A Yuli Gurriel home run in the fourth inning for the Astros and a home run by Eugenio Suárez for Seattle in the seventh off of Cristian Javier was all the action in the game until Houston started their comeback in the eighth.

It wasn’t a surprise to Seattle fans that Suarez launched a 359-foot home run. Javier is a heavy fastball pitcher and Suarez has hit 19 of his 31 home runs off fastballs.

The Astros started seeing light in the eighth inning after Andrés Muñoz came in to pitch for Seattle. Munoz is a heavy slider pitcher who showcases it 66% of the time. Houston, though, was seeing the ball well. Alvarez, who would later be the hero, led the inning off with a single and Alex Bregman crushed a 403-foot home run to cut Seattle’s lead 7-5.

All Seattle had to do was hold the Astros for three more outs.

With one pitch in to Ray’s outing, two outs in a 1-0 count, Alvarez fought his eighth pitch at bat and launched a 438-foot home run to the second deck.

#Postseason baseball has been and always will be the best. pic.twitter.com/mR6YlRlkyu

Before this, the Astros were 0-48 in their postseason history when trailing by more than one run after eight innings.

The Astros will host the Mariners in Game 2 on Thursday at 3:37 p.m.