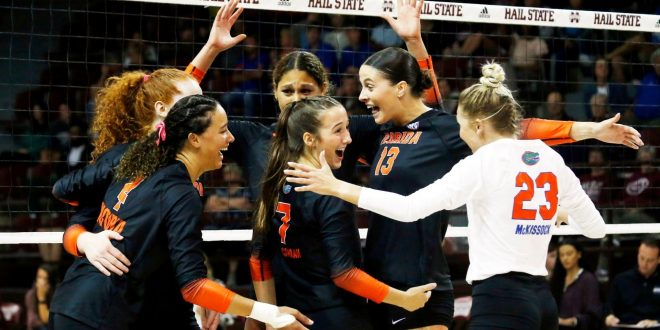 The 13th-ranked Florida women’s volleyball team crushed the Mississippi State Bulldogs in three straight sets for the second day in a row. This win will extend their streak to five.

Offensively, Sofia Victoria posted 14 kills in the three-set match, followed closely behind by Merritt Beason’s 13. Marina Markova had 10 kills on the night and Bre Kelley put up seven kills in the victory. Alexis Stucky dished out 44 assists, a three-set best for the freshman setter. Elli McKissock and Emily Canaan led the backcourt, each posting nine digs of their own. Stucky followed with eight digs and Beason had six.

Florida was down early in the first set but quickly set up a 3-0 run to take the lead. Florida’s lead grew to five points before the media timeout, taking a 15-10 lead. The pause in play didn’t slow the Gators down, extending their lead to seven points as Mississippi State took a timeout at the 20-13 mark. The Bulldogs attempted to come back, narrowing the Gators lead to four, but Florida closed out the first set with a 25-19 victory.

Florida started off strong in the second set, taking an early 5-1 advantage. They cruised through the media timeout, going into the break with a 15-11 lead. Mississippi State came within three points in the middle of the set, but this would be as close as the Bulldogs could get to the electric Gators team. Florida once again took the win, closing out the first set with a score of 25-19.

Closing Out the Weekend

By the third set, the Bulldogs were out for blood. Neither team held more than a one-point lead until the middle of the set, where the Gators pulled ahead to the 14-12 mark. The Bulldogs bit back, tying the set back up at 14-all. Florida took the point lead into the media timeout and managed to continue the lead up to the 19-18 mark where the Gators took their first timeout. The Gators were able to edge out Mississippi State, closing the match with a 6-4 run resulting in a 25-22 victory.

“Can’t say enough about the gritty performance by the Gators on back-to-back nights,” Wise said after two days of 3-and-out matches, winning Friday’s match with a straight sweep as well.

The Gators are now 15-3 on the season and 7-1 in SEC play. Their next match will be at home, inviting the Georgia Bulldogs to Gainesville on October 19. The Bulldogs are 12-5 in regular season play and 3-3 in the SEC.