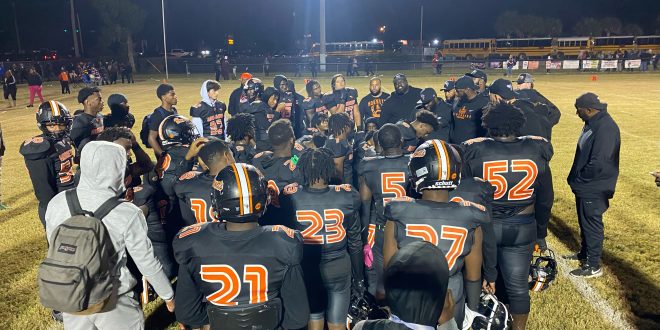 An Impressive Defensive Game leads to a Hornets Shutout

The Hawthorne Hornets put another game in the win column, despite facing a big test, shutting out the North Marion Colts 13-0.

With this victory, Hawthorne continues their unbeaten season with their seventh win of the year. After giving up 21 points in the first half a week ago to Union County, the Hornets made sure their defense was much more composed while making some big plays for the win.

Getting to the Quarterback was Key

The front four for the Hornets proved to be too much for the Colts’ offensive line to handle over the course of this contest. Every drive the Colts had on offense, the Hornets put a lot of pressure on Colts QB AJ Cussins and it led to the pocket collapsing on quite a few plays.

In total, the Hornets would record 5 sacks on the night, in addition to four quarterback hits. Because of the constant pressure put on by the Hornets, the Colts could never get into a rhythm offensively. North Marion would have 8 drives during the entire game, and they only made it inside the red zone in one of those drives, ending in a turnover on downs after an incompletion. The pressure applied by the Hornets proved to be the key difference-maker throughout the entire game.

After the game, I spoke to one of the leaders of the Hornets’ defense, senior Jailen Ruth. Ruth spoke about the importance of the practices leading up to the game as a key part to their stout performance.

“I feel like we really played good because this week at practice, we took it personally because we haven’t had a shutout all year, and we promised coach we would get him one.”

Jailen Ruth could not be Stopped

One of the players for Hawthorne that stood out in this game was senior and Washington State commit defensive end Jailen Ruth. There were no answers to containing him for most of the game. Ruth utilized his quickness off the edge from the start, making it difficult for the Colts to block him. The Colts would try to double-team him at times, but he still managed to pull through and got a huge sack late in the game.

Ruth would finish the game with a total of 2 sacks, 1 solo and 2 half sacks,  and a QB hit, showcasing his speed and ability to get to the quarterback at any given time. However, it was what he did late in the third quarter that swung the momentum in Hawthorne’s favor.

The Big Play of the Game

It was the fifth drive of the game for the Colts, and it came after a very controversial call. Hawthorne felt they should’ve had a touchdown after recovering the ball in the end zone after a muffed punt by North Marion, but the referees instead called it a touchback. It seemed like very tough luck at the time that the Hornets did not get their first points of the game on that controversial play.

Four plays later, the Hornets would get the points that they had been waiting for. On third down, Cussins dropped back to pass but instead threw it right into the hands of Jailen Ruth. He would go the other way for a 36-yard Pick Six that gave Hawthorne the lead. That play proved to be huge, as it would end up being the touchdown that decided this game.

Great Plays on Offense were Undone by Poor Mistakes

The offense for the Hornets could not find the end zone until the final stages of the fourth quarter. The 5-yard rushing touchdown by CJ Ingram with over a minute left in the fourth sealed the deal for Hawthorne. The main thing that prevented the Hornets from scoring a touchdown earlier in the game was themselves.

There were many big plays that the Hornets made throughout the game on the ground. However, the Hornets could not capitalize on those plays despite the great field position they had. There were certainly many mistakes after those big plays that contributed to the drive fizzling out.

Coach Cornelius Ingram mentioned after the game that he felt the offense did a good job running the ball and gaining yards each time. However, he also stated that there were mistakes on each drive that the offense made that would put them in a hole, whether it was penalties, the bad snap on their third drive, or even missed assignments that caused yardage to be lost.

The big thing for Hawthorne is to limit those mistakes going into next week. As they sit 7-0 on the season, the Hornets hope to finish the last two regular season games strong. They will host the Dade Christian Crusaders next week, as the Hornets hope to continue their winning ways this season.