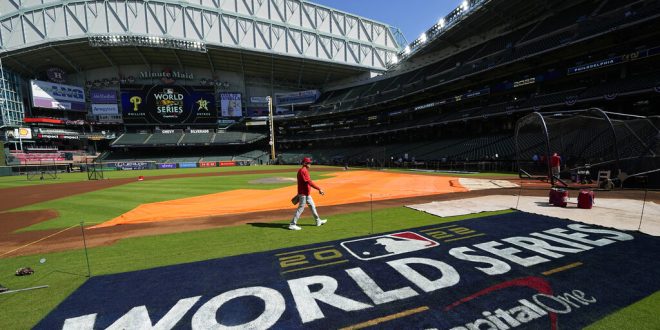 Players walk the field ahead of Game 1 of the baseball World Series between the Houston Astros and the Philadelphia Phillies on Thursday, Oct. 27, 2022, in Houston. Game 1 of the series starts Friday. (AP Photo/Eric Gay)

Phillies and Astros Face Off in Fall Classic

The Houston Astros and Philadelphia Phillies begin the 2022 MLB World Series Friday night. Thus far, the playoffs have been wildly exciting with drama and upsets surrounding the field.

The Astros come into this series as the clear favorites out of the AL. The same cannot be said for the Phillies, who made it to the World Series as the No. 6 seed out of the NL after just squeaking into the playoffs.

As the sixth seed, Philadelphia had to do some extra work in order to get to the Fall Classic. They took care of the Cardinals in the wild card round and went on to face the Atlanta Braves, one of the four 100-win regular season teams. In an upset, the Phillies advanced to the NLCS after defeating the Braves in four games. Then, Philadelphia went on to beat the San Diego Padres, another wild card team, in five games to take the NL pennant.

Philadelphia will look to designated hitter Bryce Harper to lead the way against Houston. Harper is putting on a show in the postseason, batting .419 with five homers and 11 RBIs. First basemen Rhys Hoskins has put up an identical five homers and eleven RBIs, despite batting a meager .189.

Starting pitcher Zack Wheeler should also take some credit for Philadelphia’s postseason success. Through 25.1 innings pitched, he has allowed 10 hits and five runs with a 1.78 ERA. He’s notched 25 strikeouts and has only given up one home run all postseason. Wheeler will be a key factor in shutting Houston down.

Astros Not New to World Series

Houston’s road to the World Series hasn’t been the most difficult. They came into the playoffs as the only 100-win team in the AL and took care of business sweeping the Mariners in the divisional round. The ALCS was anticlimactic, however, as this version of the Astros-Yankees rivalry wasn’t a close one. Houston swept New York and head enter the World Series without a loss in the postseason. This is Houston’s third World Series appearance in four years.

Houston’s playoff dominance has been an all-around team effort. First basemen Yuli Gurriel leads Astros hitters with 11 hits. He’s batting an outstanding .367 in the playoffs. The rest of Houston’s infield has been hot on offense, as well. Shortstop Jeremy Pena leads the Astros in homers with three and he’s batting .303 with 10 hits. Alex Bregman is hitting .333 with 10 hits and seven RBIs and Yordan Alvarez has two home runs with eight RBIs heading into the World Series.

Philadelphia comes into the Fall Classic with nothing to lose after shattering expectations. All the pressure falls on Houston to take care of business.

Game one begins Friday night at 8:03 p.m. Aaron Nola takes the mound for Philadelphia while Justin Verlander gets the ball for Houston.