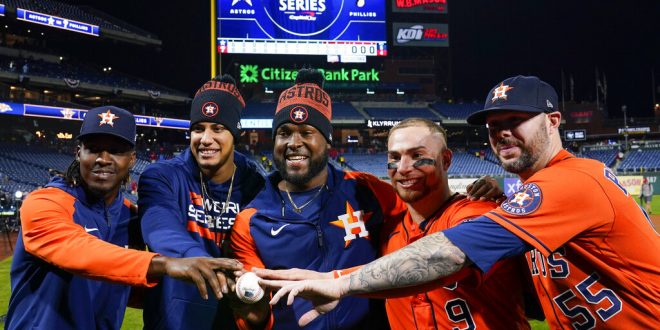 The Houston Astros defeated the Philadelphia Phillies on Wednesday 5-0. In doing so, the Astros tied the series two a piece and did so with a road victory in historic fashion. Christian Javier got the start for the Astros and delivered six hitless innings in the hostile environment. After Javier left the game, the Astros bullpen picked up right where he left off. Bryan Abreu, Rafael Montero and Ryan Pressly came in and sealed the no-hitter in the last three innings for the victory. It was the first combined no-hitter in World Series History and the second no-hitter in over a century. Former New York Yankee pitcher Don Larson was the last player to do so when he pitched a perfect game in the World Series in 1956.

WE HAVE NO HIT THE PHILADELPHIA PHILLIES IN THE #WORLDSERIES. SAID. pic.twitter.com/aLrAfkmHox

After his performance on Wednesday, Javier had one of, if not the greatest game of his entire career. Riding into enemy lines down by one game in the World Series, the stakes don’t get much higher than that. Javier was able to show precision all game relying on his fastball that the Phillies could not touch all game. Out of the 97 pitches he threw, 70 of them were fastballs and only 27 were breaking balls. In the six innings, Javier struck out nine batters and only walked two. Although his slider was the pitch to put batters away, Javier had everything firing on all cylinders that night.

This is the second time this season that the Phillies have been no-hit, with the first being against the New York Mets in April. It is also the second time this season that the Astros have thrown a combined no-hitter on a Javier start this season. The Astros threw a combined no-hitter in June against the Yankees with Javier getting the start and pitching seven innings. That is the first time in history that a team got two combined no-hitters in a season with the same starter. Javier has had an incredible season so far and the Astros might not be in this position if it wasn’t for his performance that will go down in history.

Coming off of a home loss is gut-wrenching for a team and getting no-hit could feel worse. But it is no reason to panic for the Phillies going forward because they did have control over the series before Wednesday. They ran into a pitching staff that did something we have never seen before in the World Series.

The bats for the Phillies have gotten them this far this season and they had a bad game. They will have Justin Verlander on the mound tonight against them, who has had a Cy Young type season. The bright side to that is the Phillies smacked Verlander around in game one of this series. Verlander gave up five runs in five innings pitched in that game. That would give the Phillies their first road win of the series to take the lead early.

The Phillies do, however, have Noah Syndergaard on the mound for them who has World Series experience. Granted it has been over six years since he has been in this position, but he knows the weight of the situation. They hope he can provide a spark for this team with the series tied.