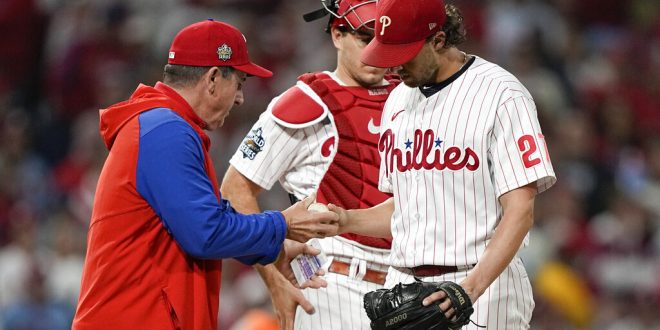 A shock in the baseball world this season has been the Philadelphia Phillies. After starting 22-29 on the season, Philadelphia fired head coach Joe Girardi, and it was all up from there. In their first game after Girardi’s departure, the Phillies dominated the Angels. Now, they’re in a 2-2 series battle with the Houston Astros in the World Series.

Dalton Guthrie played infield for the Gators from 2015-2017. He was drafted in the sixth round of the MLB draft in 2017 by the Phillies. He made his debut in the majors in September of this year and was on the Phillies NLDS roster. Guthrie did not make Philadelphia’s NLCS and World Series roster, however, he took some time to talk Phillies baseball.

Phillies manager Rob Thomson has led the way for his guys since Girardi’s departure in June. After taking down the Cardinals in the wild card series, Thomson inked a two-year deal with the Phillies. Guthrie talks about what Thomson brings to the table.

Making it to the World Series is no small feat, especially with a team of clear underdogs. Often times it runs under the radar, but a manager is crucial to the success of any team. Guthrie talks about what it means to have Thomson leading.

Guthrie’s Time in the Swamp

Dalton Guthrie found success playing ball with the Gators. In 201 games with the squad, he batted .289 with seven homers and 71 RBIs. In 2016, he batted .305 with 85 hits. Guthrie reminisces on his experience playing for the Gators.

Guthrie batted on 21 different occasions for the Phillies this season. He recorded seven hits with three runs and five RBIs. Probably the most memorable of his experiences in the majors, his first ever home run coming against the Blue Jays in late September.

Game five of the World Series is set for Thursday night. Philadelphia continues to battle with Houston as the series ramps up.