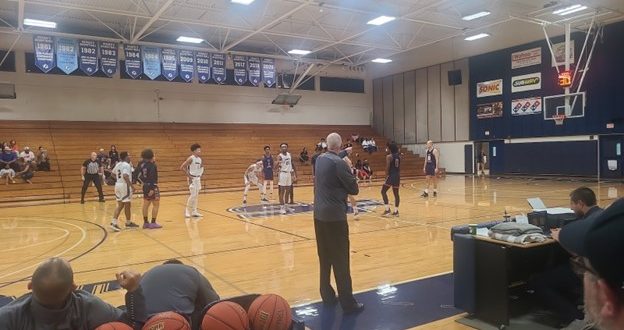 The Santa Fe Saints men’s basketball team has come out of the gates sprinting for the 2022-2023 basketball season. The Saints were dominant in every facet of the game in Tuesday’s home opener against PHS Academy.

After trading baskets for the first few possessions, the Saints began to run away early. By the 15-minute mark of the first half, Santa Fe led 21-12 and proceeded to go on a 16-3 run over the next five minutes. Their lead grew to 25 points midway through the first half. The Saints were able to do essentially anything they wanted offensively and defensively. They were scoring extremely efficiently and quickly, which led to a high-scoring 62-point half and a 37-point lead for the Saints.

Santa Fe picked up right where they left off to start the second half and dominated the rest of the way. Playing with a huge lead allowed Coach Mowry to get a look at different rotations down the stretch. It also gave the Saints starters an opportunity to rest for the long season ahead. The Saint’s took this matchup against PHS Academy by a score of 117-66.

Sophomore guard Nasir Mann led the way offensively. The 6’4 shot-maker scored 16 points on 6 of 9 shooting from the floor in just over 20 minutes of play time. He was also responsible for throwing down a monstrous dunk on a taller defender to start the second half.

Freshman center Chris Heard also got in on the action, as he threw one down to start the second half as well, right over a PHS defender.

PHS simply could not keep up with Santa Fe’s explosive fast-break offense, and the lead grew quickly. On the defensive end, the team was extremely disciplined and continuously forced PHS into taking heavily contested threes. The Saints were able to hold their opponent to just 37% shooting from the field and an abysmal 22% from three-point range.

Santa Fe shot the ball efficiently in its first game back on the court. They shot 60% from the field overall and 38% from three-point range. Five Santa Fe players scored in double figures, including four out of the five starters.

The Saints had 12 players score Tuesday night. The team spread the ball around and finished with 23 assists overall. Red-shirt sophomore guard Jalen Speer led the Saints playmaking and rebounding with nine assists and seven rebounds. He contributed 14 points to add to his impressive performance and was the primary ball-handler for most of the game.

Santa Fe dominated the game but failed to draw free throws. The team took just five free throws the whole game and did not draw any foul shots in the second half. PHS Academy shot 11 free throws but failed to capitalize on them, shooting just 46% from the line.

The Saints next game is this Friday, November 4th, against ASA College (Miami). The game will be played at a neutral sight, at the State College of Florida in Bradenton. The game will tip-off at 5:00 p.m. as the Saints strive for 2-0.

Austin Stirling is a second-year journalism major with a sports media focus. He is aspiring for a career in sports media writing/production. Contact him at austinstirlingg@gmail.com
@austinstirlingg
Previous Big 12 in the CFP Rankings
Next Houston Astros Make History