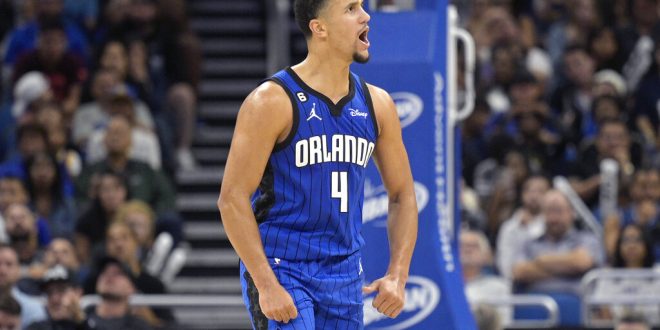 Perhaps there is some Magic left in Orlando.

Following a second-half collapse by the Golden State Warriors, the Orlando Magic handed the defending NBA champs their fourth straight loss at the Amway Center Thursday night. The Warriors fell to 3-6 overall and 0-5 on the road to continue their rough start, while Orlando improved to 2-7.

Breaking down the Magic

Jalen Suggs paved the way to victory for the Magic, recording 26 points, nine assists and one rebound. First-overall pick Paolo Banchero put up 22 points with three assists and eight rebounds.

The game was tied at 30 after the first quarter, but Golden State pulled ahead by halftime 65-53 with a 35-point second quarter. Steph Curry powered the Warriors with a 39-point performance.

Orlando had a 16-point deficit to overcome in the second half and had some help from Warriors defensive issues, with the Magic receiving the benefit of 46 free throws.

The Warriors led 73-57 after Klay Thompson nailed a pair of three-pointers. Banchero came up big late in the third quarter, scoring 12 points to bring Orlando to within two entering the final quarter.

Strong play from R.J. Hampton allowed the Magic to surge ahead, as they led 113-104 with 7:20 left in the game. Curry brought the game to within one possession as the clock ticked away. Suggs hit a pull-up three-pointer with 37.7 seconds remaining to give Orlando its final lead of 129-126. He swished a free throw a few seconds later to break the 130 barrier.

Thompson, who racked up 27 points on the night, connected on another three ball to bring the game to a one-point deficit. Thompson missed a shot as the buzzer sounded to give the Magic the win.

The Magic will play their next six games at home and will take on the 2-5 Sacramento Kings Saturday.