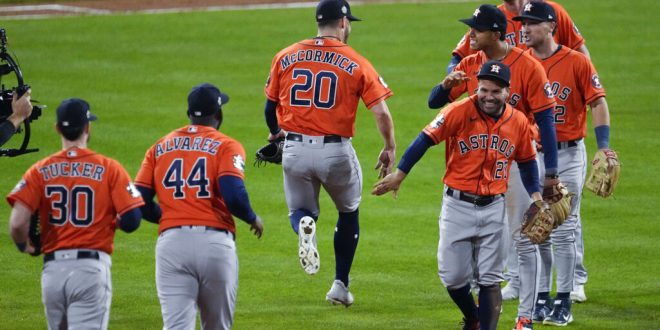 The Houston Astros celebrate their win in Game 5 of baseball's World Series between the Houston Astros and the Philadelphia Phillies on Friday, Nov. 4, 2022, in Philadelphia. The Astros won 3-2, to take a one game lead in the best of seven series. (AP Photo/Matt Rourke)

The Houston Astros defeated the Philadelphia Phillies in game 5 of the 2022 World Series last night to take a 3-2 series lead.

The @Astros are going home with a chance to clinch! #WorldSeries pic.twitter.com/4PFW5rgZi7

Although the Astros pitched well, players such as Jeremy Peña were able to deliver in clutch moments that ultimately decided this crucial game 5.

The Astros are now one win away from winning their second world series title in five years. And the odds of them doing so are in their favor. Of the 65 World Series that were tied 2-2, 45 of the teams that won game five ended up winning the entire series.

Like they have done all season, the Philadelphia Phillies continued to display their grit with their backs against the wall.

After being no-hit in game four, the Phillies new that they would have to score runs if they hoped to win this massive game.

That’s exactly what Kyle Schwarber had in mind when he hit a leadoff homer off Verlander’s second pitch of the night.

After this tied the game in the first inning, the Phillies struggled to find much offense. Only four players recorded hits for Philadelphia last night (Kyle Schwarber, Bryce Harper, Alec Bohm, and Jean Segura).

This was the story until the bottom of the eighth, when their backs were against the wall down 3-1.

After two players were walked,  Jean Segura knocked in a run on an RBI single to right-center field.

With runners at first and third and only one out, it looked as though the Phillies had a very good chance to win.

But that wasn’t the outcome that the Astros had in mind.

For the Houston Astros, the ability to deliver in big time moments is what has propelled them to this moment. Whether its the emergence of rookie shortstop Jeremy Peña or Christian Javier’s impressive pitching, guys have stepped up when they were needed most.

Jeremy Peña went 3-for-4 in this crucial game, hitting a go-ahead home run in the fourth inning.

His play has been a major part of Houston’s dominant offensive performance. But it was defense that won the game for Houston.

In the bottom of the eighth inning, Trey Mancini made an unbelievable scoop to retire the fighting Phillies.

TREY MANCINI. ARE YOU KIDDING ME?!?!?!?! pic.twitter.com/o6HtgAKStW

Mancini was only playing at first due to an injury to Yuli Gurriel suffered during the seventh inning of the game.

And as if that wasn’t clutch enough, Chas McCormick may have made one of the greatest catches in World Series History last night.

The Astros are now on the verge of becoming a dynasty. They’ll look to take care of business tomorrow night at 8:03 PM in Houston. 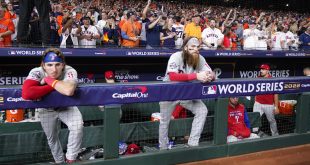