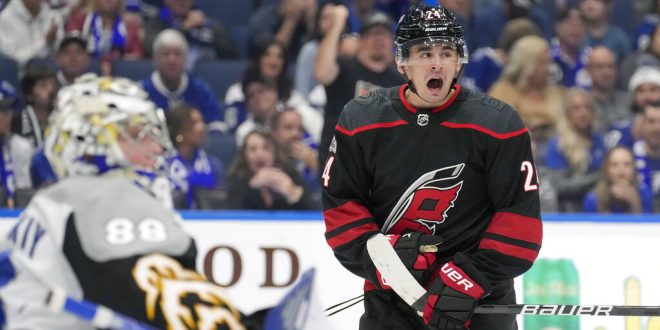 Lightning Fall to Hurricanes in Shootout

For one of the league’s best goalies in Andrei Vasilevskiy, Thursday night posed a stiff test. The Hurricanes got off 15 shots in the first period alone, and 55 total on the night.

The scoring began just over 8 minutes into the game when Carolina’s Seth Jarvis got one past Vasy.

Seth Jarvis bangs one home right after the Carolina power play expires, breaking the ice in the first!#LetsGoCanes pic.twitter.com/nIQRvmR6bC

What could have been a huge first period for the visitors ended just 1-0 thanks to the play of Tampa Bay’s star in net.

Home Team Strikes in the Second

All of Tampa Bay’s regulation scoring came in a huge middle 20 minutes.

A power play early in the period seemingly led to a 1-1 tie, but the goal was waved off after a long review.

The officials are taking a look to see if this was potentially kicked in. pic.twitter.com/i9PwdmELCA

Another power play a few minutes later allowed Ross Colton to officially tie the game at 1-1.

Shortly after, a SportsCenter-Top-Ten-worthy goal by Nicholas Paul off of a Steven Stamkos assist made it 2-1.

Then, Martin Necas weathered the storm for Carolina, tying things 2-2 on a power play. Later, a wild period ended 3-2 after a late Nikita Kucherov power play goal for Tampa Bay.

In the third period, Carolina continued to dominate the shots-on-goal battle.

The Hurricanes topped 50 shots and cashed one in with Brady Skjei’s shorthanded equalizer late in the contest.

Brady Skjei with a TERRIFIC shot on the odd-man rush for a SHORTY! Hurricanes tie it up at 3 in the third!#LetsGoCanes pic.twitter.com/bj3UM1vZXn

An incredible overall effort for Andrei Vasilevskiy ended in defeat.

For Carolina, it was the second shootout victory in a row. The Hurricanes look to continue what’s been an ultra-hot start on Friday night against Buffalo, at home in PNC Arena.

For the Lightning, the Sabres are also their next game. After a night off, they’ll have a chance to bounce back against Buffalo on Saturday night.