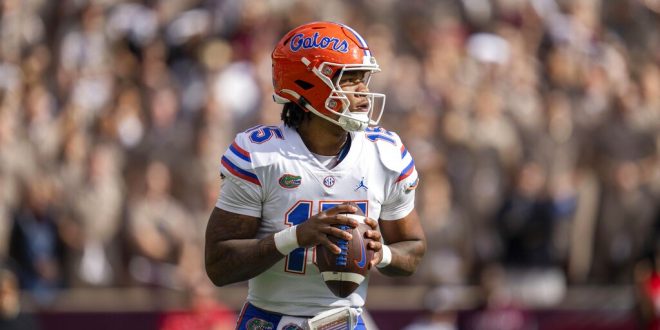 Sitting at 5-4 in Billy Napier‘s first season, the Florida Gators need just one more win to claim bowl eligibility for the fifth-straight season. Florida (5-4, 2-4 SEC) hosts SEC East rival South Carolina (6-3, 3-3 SEC) on Saturday at 4 p.m. in their final home game of the 2022 season. Television coverage can be found on the SEC Network. Additionally, the Gators are 8-point favorites over the Gamecocks, according to ESPN’s PickCenter.

One more time in The Swamp. pic.twitter.com/aNmcuXg2qo

Despite being 1-2 in their last three games, with both losses to now top-10 teams, the Gator offense has found its rhythm under quarterback Anthony Richardson, who has accounted for seven total touchdowns, 863 total yards of offense and zero interceptions over the last three games. Florida defeated Texas A&M last week 41-24 behind four total touchdowns from Richardson.

On Richardson, South Carolina head coach Shane Beamer said he has hardly seen anyone on film be able to stop the Gator quarterback this season.

Defensively, the Gators’ second-half efforts led to a near-comeback against Georgia two weeks ago and a second-half shutout against Texas A&M last weekend. Over the last two games, Florida has forced five total turnovers, including two fumble recoveries in the fourth quarter against the Aggies.

On Wednesday, Napier said this focus on the turnover margin was something that helped him succeed at Louisiana and something he wants to carry over to Florida.

A win over South Carolina would give Florida their sixth win in the last eight matchups with the Gamecocks and give Florida bowl eligibility for the fifth-straight season.

Read more about what the Gators said this week about the Gamecocks here:

The Florida Gators will be honoring 18 players for Senior Day, including linebackers Ventrell Miller and Amari Burney, safety Trey Dean III, receivers Justin Shorter and Trent Whittemore, offensive lineman Richard Gouraige and running back Nay’Quan Wright. Additionally, the Gators will be honoring military members through their “Saluting Those Who Serve” game presented by Vystar Credit Union.

Of the 18 honored, a few players, including Shorter, Whittemore and Wright, still technically have at least a season of eligibility left due to redshirts and a free year of eligibility given due to the COVID-19 pandemic. Despite this, Napier said on Wednesday during the SEC Coaches Teleconference that these players will be honored due to their academic standing as seniors or graduate students.

“This has been a really good group. Some of these guys in particular have been really impactful in a lot of different ways – through their example, through their words,” Napier added during his Wednesday night press conference.

For Gouraige, he wants to cherish every moment while he can as a Gator.

“I remember it like it was yesterday. I had just first walked on the campus, building this relationship with my brothers through the offseasons, through everything. It means a lot,” he said Wednesday night. “This is probably gonna be one of my last games playing for Florida, and I just want to go out there and cherish every moment with my brothers.”

“I’m not the type of person to cry but I’m just going to feel some type of way just knowing that this is my last game in The Swamp,” Burney said during his press availability on Wednesday night.

After a 1-2 start in Beamer’s second season leading South Carolina, the Gamecocks have rallied to win five of their last six matchups. Additionally, the Gamecocks started 0-2 in SEC play after back-to-back losses to Arkansas and No. 1 Georgia, but have won three of their last four conference games.

Despite being without leading rusher MarShawn Lloyd, who missed the game due to a deep thigh bruise, the Gamecocks ran for over 200 yards and averaged 5.9 yards per carry. Beamer said the team will need to do much of the same this week.

Lloyd, who leads South Carolina with 559 yards and nine touchdowns on the ground, is participating in practice and considered day-to-day, according to Beamer. Additionally, Napier praised Lloyd for his vision and overall skill during his portion of the SEC Coaches Teleconference on Wednesday.

A win on Saturday would give the Gamecocks back-to-back seven-win seasons in the first two seasons under Beamer.

All SEC teams are in action for Week 11 with no out of conference games.

Cam is a fourth-year broadcast journalism sports and media major at the University of Florida. In addition to writing and recording radio trendings for WRUF, Cam covers North Florida HS football for The Prep Zone and Mainstreet Daily News and UF football and basketball for Inside the Gators.
Previous USMNT Announces Qatar World Cup Roster
Next LSU Looks to Continue Hot Streak Against Arkansas