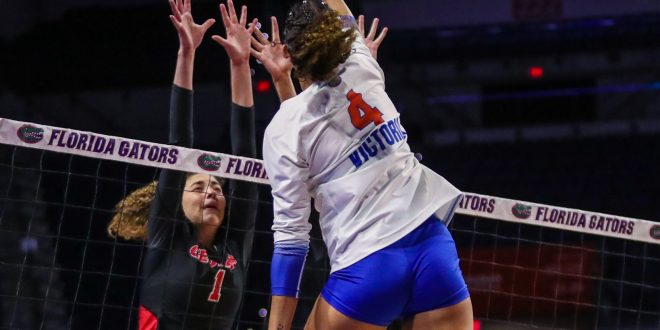 Sofia Victoria goes up for a kill in the Gator Volleyball team's match against Georgia on Oct. 19. Photo from @GatorsVB on Twitter.

The Florida volleyball team defeated the Texas A&M Aggies 3-1 in College Station on Saturday. The Gators came into the matchup riding a four-game win streak, while the Aggies were deep into a three-game losing streak.

The Gators got off to a hot start in set one, taking a quick 6-2 lead. Victoria wasted no time making an impact on the court, delivering an early block and two kills. The Aggies rallied to tie the set at nine points, but shortly after, a four-point serving streak from Beason extended the Gators’ lead 19-12.

Senior Marina Markova helped Florida seal the deal on the first set (25-18) with a kill and block.

The Gators continued to roll in set two, jumping to a quick 15-3 lead over the Aggies, thanks to a 10 point serving run from Beason. The Aggies had no answer for Florida’s dominant start to the second set, and the Gators breezed through with a 25-16 win.

Texas A&M wouldn’t go down without a fight and took over the third set. The Aggies claimed a quick 5-1 lead, and maintained their lead over the Gators for the entire set. The Gators were plagued with attacking and serving errors that cost them down the stretch. Five of Caroline Meuth‘s 17 kills on the night helped the Aggies take set three 25-16.

The Gators fought a tough battle over the Aggies in set four. Back to back attacking errors from the Aggies allowed the Gators to take a 6-5 lead. Neither team was able to take control of the momentum until the set was tied at 12 points. McKissock went on a three-point serving run to give the Gators a 16-12 advantage.

A service error from Meuth, followed by a kill from Victoria and another Texas A&M attack error helped Florida take a 19-14 lead. A kill from Bre Kelley, Texas A&M errors, and a kill from Beason allowed the Gators to secure the match with a 25-20 set four win.

The Gators take the court next against the Kentucky Wildcats at home Saturday at 4 p.m. The Wildcats travel to Gainesville for a two-game series Nov. 19-20. Florida’s seniors will be honored before Sunday’s match.