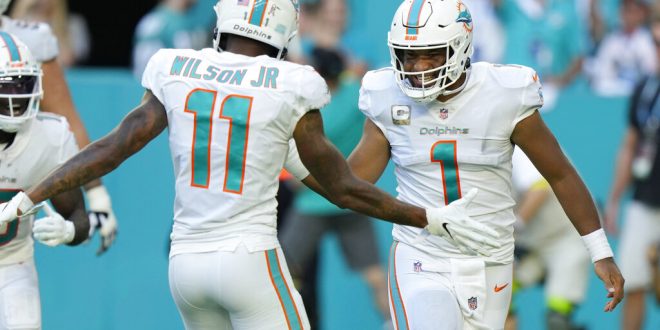 It’s four wins on the trot for Miami as the Dolphins surged past the Cleveland Browns 39-17 on Sunday.

Tua Tagovailoa continued his scorching return to the gridiron following his Week 4 concussion, throwing for 285 yards and three touchdowns on the win.

Of all the premier quarterback matchups the 2022-23 NFL season has to offer, Tagovailoa v. Jacoby Brissett will likely never make the shortlist.

The Browns came on the back of their most complete game yet, a win over the Bengals. A 48-yard kickoff return courtesy of Jerome Ford set up Brissett at the Cleveland 47.

First play: play action and a surplus of time for Brissett to drop back and let it fly through the golden beams of the Florida sun.

Thirty-eight yards later and a Donovan Peoples-Jones catch, had the Browns living on a dream at the Miami 15. Strong out of the gate, a continuation of what they had dealt the Bengals. Four plays later, the Browns had first and goal at the Miami one-yard line.

Brissett would realize the dream with a pass to Harrison Bryant good for six points and an opening drive Browns lead.

That was the last time the Browns would lead as their dream crashed at the hands of Tagovailoa and the reality of a red-hot Dolphins team.

With a chance to answer, the Dolphins drove the Browns downfield at will. Ten plays, 84 yards and in six minutes the Dolphins had their own six points.

The nightmare would continue for the Browns team that would see a fumble on its next drive answered with a Miami field goal for a 10-3 Dolphins lead.

Tagovailoa found Trent Sherfield for a score before ending the quarter on a 17-3 lead.

When the confetti settled on the Sunday game, the Dolphins held their biggest win of the season. A 39-17 win means more than the good side of the scoreboard.

The Dolphins (7-3) will host the Houston Texans next in a matchup favoring Miami.