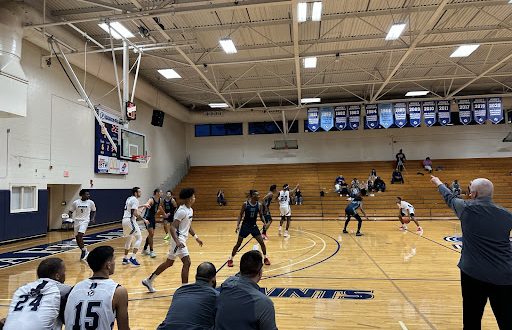 After trading buckets all game, the State College of Florida Manatees pulled ahead in the final minute to defeat Santa Fe 92-85 Saturday afternoon. The Saints’ loss at home drops them to 3-2 on the season with a two-game losing streak. Additionally, the loss evens the series after the Saints took the first match 81-71.

Guard Jalen Speer helped Santa Fe build an early lead with a couple of 3-point shots. The Saints and SCF both hit six shots beyond the arc to keep the game tightly contested. In the first half, the Saints shot 46% from three-point range while the Manatees shot 38%.

Towards the midway point of the first half, SCF began to pull ahead with a six-point lead. The Saints started to shift their focus to attacking the basket, hitting clutch layups to keep the game close.

As the first half winded down, Santa Fe went on a big 9-2 run to take a 42-40 lead. The Manatees hit open jump shots and made heavily contested layups to keep the game within reach. Santa Fe swung the ball around and found a wide-open Nikolaos Noumeros in the corner to take a 49-48 lead into halftime.

The second half started the same way as the first with neither team being able to take control. SCF had an answer for every Saints score and, for most of the half, the largest lead either side held was three points.

Midway through the second half, SCF forward Elijah Terry threw down a monster putback dunk to give the Manatees a 65-61 lead. Another Manatee player hit a 3-pointer on the following possession to take a seven-point lead with nine minutes left in the game.

The Saints didn’t let the run get to them and went on a 12-5 run, capped off by a Speer 3-pointer to tie it at 73 points apiece. Santa Fe took a slim one-point lead at the 5:40 mark when guard Nasir Mann scored a 4-point play, getting the Saints bench excited.

The Manatees used late free throws to take a late lead with a minute left and an SCF layup with 34 seconds left made it a five-point game. The Saints had one last chance to try and get back into the game, but a costly turnover doomed them.

Freshman forward Kordell Brown led the way for the Saints, scoring 18 points alongside nine rebounds. Santa Fe had five players score in double figures, with guard Nigel Martin having 13 points off the bench.

As a team, Santa Fe finished with 50 rebounds, 34 of them being defensive. Both forwards, Brown and Noumeros, led the team with nine rebounds each. The Saints won the battle on the boards 50 to 40.

Speer led the Saints with ten assists. As a whole, Santa Fe finished with 21 assists, showing just how well this team moved the ball tonight. Ball movement has been huge for the Saints and will continue to be for the rest of the season.

On the defensive side of the ball, Santa Fe finished with just two steals and 3 blocks. Additionally, SCF shot 42.5% from the floor compared to the Saints’ 42.3%. The shooting was really even, but the Manatees’ ability to successfully shoot free throws was what won them the game.

Santa Fe travels to Tallahassee Community College Tuesday, 11/22, at 6:00 pm. The Saints look to bounce back and break the two-game losing streak and get back into the win column.

Freshman at the University of Florida. Majoring in Journalism on the sports & media track.
@twitter.com/raininggamess
Previous Santa Fe Survives Thriller vs Miami Dade to Kick off the Best Western Gateway Grand Classic
Next Gator Volleyball Drops Home Finale Against Kentucky

There is a lot that goes into getting to the next level in basketball. It …