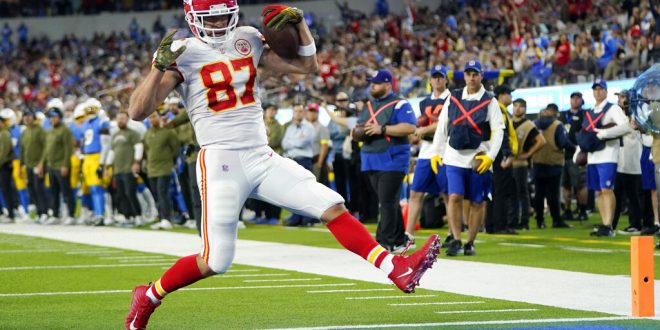 Kansas City Chiefs tight end Travis Kelce runs in for a touchdown during the first half of an NFL football game against the Los Angeles Chargers Sunday, Nov. 20, 2022, in Inglewood, Calif. (AP Photo/Jae C. Hong)

Monday Night Football’s clash between the San Francisco 49ers and Arizona Cardinals will punctuate a ground-shaking Week 11 in the NFL.

Here are the week’s biggest winners and disappointments along some Travis Kelce Magic.

Best Teams in the NFL

Week 11 featured a mix of the best team and a contender for biggest disappointment. The Dallas Cowboys got out to a 23-3 lead at the half and never looked back on the way to a 40-3 blowout of the Vikings. Dallas crushed Minnesota’s seven-game win streak on the back of a Tony Pollard clinic. Pollard finished the game with 80 yards on 15 carries. But it was his work in the air that made him a star in Dallas. Pollard caught six passes for 109 yards and two touchdowns. His backfield partner in Ezekiel Elliott also punched in two scores for Dallas.

The love story of sports, the underdog wins. It’s safe to say that Taylor Heinicke has officially won the starting job under center for the Commanders. Heinicke threw 191 yards and zero touchdowns in a game marked by the Commanders defense. Washington will want their quarterback to find the endzone, but they will take the consistency in a season that kicked off with unwanted question marks.

A 3-3 score line at the half could not prepare the Jets for the disappointment of their loss Sunday night. After being held to those meager three points all night, the Jets offense punted the ball into the crisp New England air. Overtime was ahead right? Marcus Jones returned the punt 84 yards for a touchdown that sent a ripple through the AFC East. The Jets now sit at the bottom of the most competitive division in the NFL this season. The Jets sit at 6-4 behind the Patriots, Bills and Dolphins, with Buffalo and Miami boasting a 7-3 record.

There’s a leader in the 8-2 Kansas City Chiefs.

Owners of the AFC West.

Bolstered by the best tight end in the game: Travis Kelce.

Six catches for 115 yards good for three touchdowns saw the Chiefs down the Chargers 30-27 in a thriller. The game meant more than a win for Kelce, it meant history. Following Sunday’s performance, no tight end in NFL history has more 100-yard games than Kelce. Kelce moved to the pole racking up 33 100-yard games with his final reception of the game, a game-winner with 31 seconds left to play.