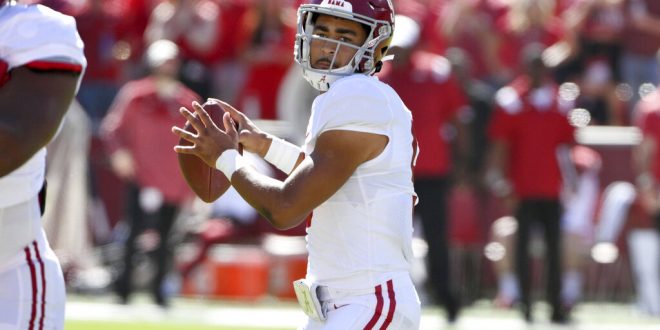 Alabama quarterback Bryce Young (9) drops back to pass against Arkansas during the first half of an NCAA college football game Saturday, Oct. 1, 2022, in Fayetteville, Ark. (AP Photo/Michael Woods)

Tennessee vs Vanderbilt, LSU vs Texas A&M, the Egg Bowl and the Iron Bowl highlight SEC matchups on rivalry weekend.

These two teams are riding on opposite sides of the spectrum right now.

The Volunteers are coming off a heartbreaking loss to South Carolina where their college football playoff hopes have been virtually squandered. To add salt to the wound, star Quarterback Hendon Hooker suffered what could be a season-ending injury.

The quarterback was well on his way to New York for the Heisman ceremony and will now be on the sideline for the rest of the season.

I’ll never forget the yr @henhook2 had in 2022.
Led an explosive offense & did it w/ class-
This setback will lead to an even better comeback-
Best of luck w/ your surgery & rehab to return even stronger-Thank you for all you did for CFB-really enjoyed following your journey!

Vanderbilt has a lot to look forward to heading into this game. They are fighting for bowl eligibility and with the injury of Hooker, it now looks more possible than ever.

Vanderbilt is now coming off an upset win over Florida, beating them for the first time since 1988.

The meeting between the Commodores and the Volunteers will be the 117th all-time. Tennessee leads the series 78-33-5.

First Bank Stadium will be sold out in Nashville. According to ESPN, the Vols are favored by 14 points and kickoff is set for 7:30 p.m.

A lot on the line for LSU in this game while Texas A&M really has nothing to lose.

In their 60th meeting, LSU must win this game in order to keep its College Football Playoff hopes alive. They have already locked in their position to represent the SEC west in the SEC Championship game against Georgia.

Jayden Daniels has been the workhorse for the Tigers offense and leads the team in touchdowns and passing and rushing yards.

The Aggies have struggled this season and are sitting at 4-7. Running back, Devon Achane has been the light for the Aggie offense as he has racked up 887 yards and six touchdowns this season.

LSU has dominated this series over the last ten years winning eight of the last 10.

Kickoff in College Station is scheduled for 7 p.m.

The Iron Bowl is one of the biggest games on rivalry weekend and the endings always seem to have a bit of flair to them. In two of the last three years, the games have been decided by three points or less. How can anyone forget the miraculous kick-six?

Alabama has had a rougher-than-normal season losing to both LSU and Tennessee this year. They are looking ahead now to a possible New Year’s Six bowl game but have to get by the Tigers first. The last time an unranked Auburn team beat a ranked Crimson Tide team was in 2002.

Sullivan Award finalist Bryce Young has been a monster on the field throwing for over 2,600 yards and 26 touchdowns this season.

For Auburn, Tank Bigsby has been that man as he has racked up over 900 yards on the ground and 10 touchdowns this year.

Auburn needs a win in order to move on to a bowl game.

The Tide and Tigers have a long rich history in which Alabama leads the all-time series 48-37-1. Kickoff for the Iron Bowl will be in Tuscaloosa at 3:30 p.m.

The Ole Miss Rebels and the Mississippi State Bulldogs play in one of the more legendary rivalry games around in the Egg Bowl. These two teams have met 118 times in their history and it has been a back-and-forth matchup for the last ten years.

The Egg Bowl gave us one of the best moments of the 2017 season.

there are “DK Metcalf” days until Ole Miss football is back!!!
pic.twitter.com/BtSMdpFv6Q

Ole Miss will enter this game after a tough loss to the Arkansas Razorbacks. The team could have a lot of outside factors weighing in on their performance as rumors have been floating around that Lane Kiffin could leave for the Auburn job.

Lane Kiffin has been denying these rumors and has been preparing for the Egg Bowl.

Mississippi State has had an average year. They are sitting at 7-5 and looking to end a two-game losing streak in the series.

Will Rogers is playing at an elite level racking up over 3,400 yards passing and 32 touchdowns this year.

The Bulldogs are coming off of a bull-dozing of East Tennessee State and are hoping the momentum rolls into a victory in Oxford.