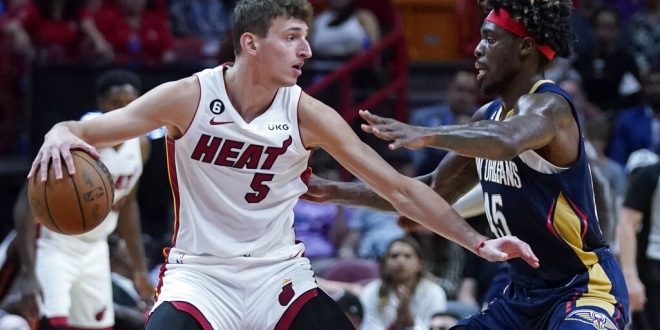 While the NBA  season has just kicked off, there is turmoil in South Florida. Although the team appears solid on paper, the results thus far do not mirror that.  After competing at such a high level throughout last season’s conference finals, they secured hope for the season to come. However, since Jimmy Butler’s last-second missed shot, the Heat haven’t looked like the same team. These first seventeen games of the season have been nothing short of disappointing for Miami.

Miami has posted a whopping record of 7-10 and has lost four of their last five games. The issue doesn’t seem specific to be the team’s “big three,” Butler, Herro, and Adebayo, but instead with the team’s supporting cast. The Miami Heat rank 27 out of 30 teams in points per game. Alongside this, statistically speaking, the Heat make around forty-five percent of its shots, thirty-four point four percent of threes. The only bench players averaging double-digits are Max Strus and Gabe Vincent. Other than this, when Butler, Herro, and Adebayo are resting during the game, there is little relief for Miami’s offense

would ya look at that pic.twitter.com/9PzvoVrV1C

In order to return to their usual form, Miami’s role players will have to step up. For a franchise that values the intricacies that a bench player can provide to a line-up, the team has received little support off the bench.

Sharp-shooting forward Duncan Robinson is averaging just over six points a game this year. He signed a five-year 90$ million contract after being a vital piece to the team’s Finals run a few years ago. However, the Michigan product hasn’t seemed to find a rhythm since his big payday.

Despite receiving an increase in playing time since last season, Caleb Martin’s stats have shown little improvement. Despite nearly playing 10 more minutes a game than last season, Martin is averaging the same amount of points. The former Charlotte Hornet isn’t as efficient, despite shooting 50% from the field last year, he is at 44%. Besides his slow start offensively, Martin is a defensive anchor for Miami’s bench.  Once his struggles subside,

Rookie Nikola Jovic has suffered the road bumps of a typical season. There have been highs and lows, but he has certainly flashed potential. The Serbian rookie has seen a boost in minutes, even scoring 18 points three games ago. Despite not surpassing five minutes on the floor for the first several games of his career, he has played over 20 minutes every game since Nov.16. Although he has demonstrated momentary brilliance on the offensive end, he is still adjusting to being an NBA defender.

What Miami has to look forward to

Luckily, Miami has not dug itself into a hole that it cannot get out of. The team is just 2 games away from a playoff spot. Although the Celtics and Bucks have excelled early on, the rest of the league is fighting to separate themselves. Teams like the Sixers, Nets and Hawks are still yet to establish a rhythm either.

The Miami Heat are undoubtedly working hard to turn their season around. With the 2022-2023 season still being young, there is much room for progress to be made, with any team, that is. The disappointment has definitely set in, not only throughout Head Coach Erik Spoelstra but for all Miami fans so far this year. It feels as though the team on the court lacks the motivation to get the momentum back in their corner. Struggling in the Eastern Conference, the Heat hope to advance from their number eleven spot within the next few weeks after making adjustments.

Tyler Carmona is a junior journalism major at the University of Florida. Originally from Miami, Tyler played football as a wide receiver at the University of St. Francis before transferring to UF.
@@TylerCarmona
Previous Gator Men’s Basketball Falls To Xavier
Next NFL is back in Florida after all three teams had bye weeks 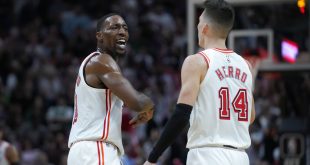 The Miami Heat and Boston Celtics faced off Tuesday night in the newly-named Miami-Dade Arena. …