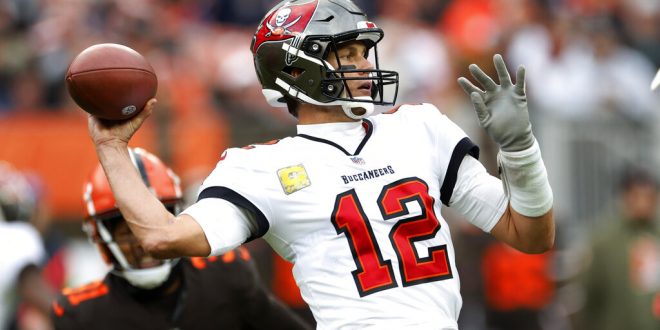 Tampa Bay Buccaneers quarterback Tom Brady (12) throws a pass during the second half of an NFL football game against the Cleveland Browns in Cleveland, Sunday, Nov. 27, 2022. (AP Photo/Ron Schwane)

The Tampa Bay Buccaneers’ two-game winning streak was snapped Sunday after falling to the Cleveland Browns in overtime 23-17. The Bucs season has seen its ups and downs, but the team had started to pick things up as of late.

Beat at Their Own Game

Tampa Bay assigned cornerback Carlton Davis to cover Browns receiver Amari Cooper. While the rest of the team executed a variety of defensive schemes, Davis and Cooper were paired with each other for a significant portion of the contest. Cooper leads the league in touchdowns while facing man coverage.

Most in the NFL🥇 pic.twitter.com/6zyK2nD14A

Davis was no match for Cooper’s polished patterns, and the Miami native stunned Davis with his suddenness. The former Raider and Cowboy’s burst and stem-steps off the line of scrimmage often convinced Davis to pre-maturely flip his hips and commit to the deep ball. The four-time Pro-Bowler hauled in seven passes for 94 yards.

Linebackers Lavonte David and Devin White statistically stack up with the league’s top pass-defending linebackers. Additionally, safety Antoine Winfield Jr served as a defensive anchor in Super Bowl LV. However, none of this prevented tight end David Njoku from having his best game of the season. The University of Miami product snagged five passes, including a one-handed touchdown that sent the game into overtime.

The middle of the field was regularly open, as Tampa Bay was occupied by trying to limit deep threats like Cooper and Anthony Schwartz. Defensive schemes like Tampa 2 assign a great deal of coverage responsibility to the middle linebackers, as they are in charge of a significant window between the defensive lineman and safety.

Offense is Middle of the Pack

Despite the negative buzz surrounding his personal life at the beginning of the season, Tom Brady continues to perform at an outlandishly efficient rate. The 45-year-old field general has tossed 12 touchdowns this year with only two interceptions. On Sunday, Brady threw for two touchdowns and 246 yards. He avoided turning the ball over, but he was sacked three times.

Tom Brady now has now thrown a touchdown to 96 different players in his career.

Wide receiver Chris Godwin had his best game of the season, hauling in twelve passes for 110 yards and a touchdown. The Browns zeroed in on Mike Evans, forcing him to finish with just two catches. This strategy allowed Godwin to find weak spots in the defense throughout the game.

Rookie running back Rachaad White has served as a glaring bright spot this year. The Kansas City native caught nine passes for 45 yards while rushing for 64 yards. His well-rounded skill set makes him an asset for this team with Leonard Fournette’s absence due to a hip injury.

Despite Sunday’s loss and the Bucs’ below average record, they still hold the lead in the NFC South.

The team next faces off against the New Orleans Saints on Dec. 5 at 8:15 p.m.

Tyler Carmona is a junior journalism major at the University of Florida. Originally from Miami, Tyler played football as a wide receiver at the University of St. Francis before transferring to UF.
@@TylerCarmona
Previous Costa Rica Bounces Back Against Japan and Germany Draws Spain to Remain Alive in Qatar
Next Michigan Dominates Ohio State 45-23