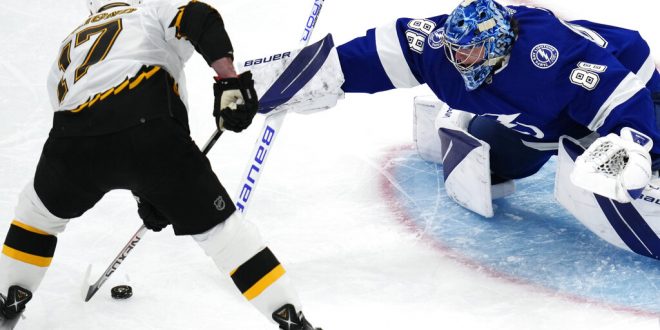 The Bruins beat the Lightning by a score of 3-1 on Tuesday night.

Boston netted three goals on the night. The first coming at the beginning of the first period by Taylor Hall off a deflected puck played by Brandon Carlo.

The Lightning responded at the end of the second with a goal from Steven Stamkos on the power-play. This slap-shot assisted by Nikita Kucherov and Brayden Point gave Stamkos his 999th career point and tied the game entering the third period.

The tie broke less than three minutes into the third with another Hall goal for Boston. He buried a power-play screamer past the keeper on an assist from Pavel Zacha and Nick Foligno. Hall finished the night with two goals, bringing his total to eight on the season.

The Bruins tallied another score on the night with an empty net goal in the last minute of the game. The win extended the Bruins’ NHL record of 13 home wins to begin a season.

Bruins have had the Lightning’s number

Boston has come out of the gates hot, starting the season with an 18-3 record. It is first in the Atlantic division and has surprised many after being a first-round exit in last year’s playoffs.

The Tampa Bay Lightning are still a clear powerhouse of the Atlantic division. The Lightning have been to three Stanley Cups in the last three years and have won two of them. It was a slow start to the year for Tampa Bay, going 7-6-1 in its first 14 games. Since that start, the Lightning have gone on two winning streaks to go 6-2 in their eight games. They now have a 13-8-1 record and are currently third in the Atlantic division.

In the Lightning’s last eight games where they went 6-2, both losses came at the hands of the Bruins. They fell to the Bruins in Tampa Bay on Nov. 21 and now again Tuesday on the road in Boston.

The Bruins have had the Lightning’s number to start the year. The next time the teams meet is Jan. 26 after the new year.