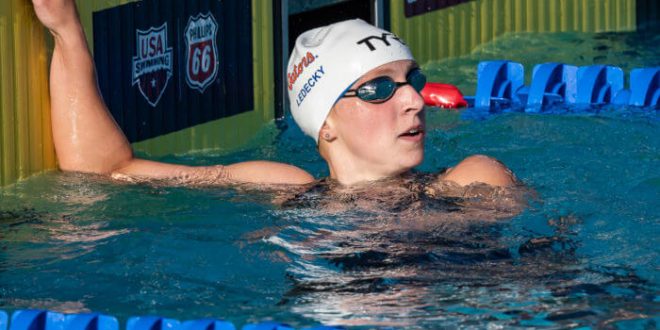 Katie Ledecky continued her historical run on Wednesday evening, becoming the first woman swimmer to secure a spot at the 2024 U.S. Olympic Trials. The Florida Gators volunteer coach won the 800m free by over 23 seconds at the U.S. Open in Greensboro, North Carolina. The three-time Olympian clocked an official time of 8:13.90, narrowly missing the meet record of 8:12.21, which was set by Ledecky back in 2021. Finishing runner-up to Ledecky with a time of 8:37.89 was 17-year old Michaela Mattes, who is a 2023 Gator commit.

Ledecky and the Gators

Ledecky moved to Florida in 2021 to train under the Florida head coach Anthony Nesty, who also was an assistant coach at the previous Olympic games for team USA. Nesty boasts multiple coaching and personal accolades in the pool. He has led the Gators to 10 back-to-back conference titles, and throughout his personal career, won an Olympic gold medal.

With Ledecky being one of the most decorated athletes in swimming history, the two will make a strong athlete and coaching duo ahead of the 2024 Olympic games in Paris. Ledecky currently holds 10 Olympic medals, seven of which are gold. Ledecky recently broke two world records in the 1,500m freestyle and SCM 800. The superstar swimmer doesn’t just work alongside Nesty in the pool. Ledecky continues to spread her swimming expertise outside the pool as a volunteer assistant coach for the Gators.

Florida sent 14 swimmers from their program to compete for an Olympic Trials spot over the four-day meet. In Wednesday’s competition, Alfonso Mestre and Eric Brown placed second and sixth for the Gators, respectively. Mestre clocked a time of 7:54.80 in the 800m free, and Brown finished with a time of 8:04.47. Both swimmers qualified for the Olympic Trials, swimming under the official standard of 8:09.69.

The Gators will continue to compete in events Thursday through Saturday. Ledecky will also compete in the 400m free, 200m free and 1,500m free.