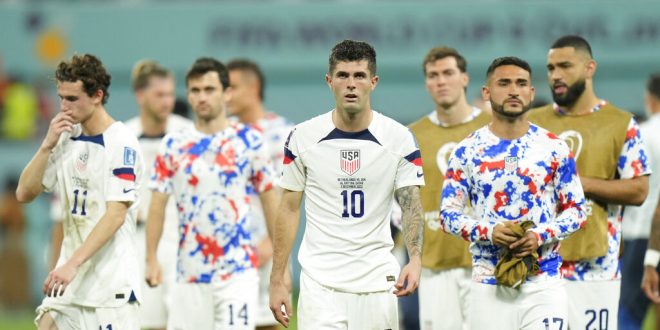 Players of the United States salute supporters at the end of the World Cup round of 16 soccer match between the Netherlands and the United States, at the Khalifa International Stadium in Doha, Qatar, Saturday, Dec. 3, 2022. (AP Photo/Francisco Seco)

For American soccer fans, Qatar’s World Cup was a chance to shock the world and see what an impressive young squad can do. While the United States Men’s National Team did meet expectations, they will still return home disappointed.

The American side’s woes started early when Denzel Dumfries crossed the ball into Memphis Depay, who arrived late to the box and buried the ball in the net for a 10th-minute goal.

The United States attempted to fight back, but ultimately the lead widened to 2-0 when Dumfries assisted again, this time looping the ball to a wide-open Daley Blind.

After the first half, American coach Gregg Berhalter deployed a false-9, substituting Giovani Reyna for starting striker Jesús Ferreira. This changed the focus of the attack, emphasizing ball movement over punching it in. And for a short time tactical change worked.

The United States placed significantly more pressure on the Dutch throughout the second half. Haji Wright was able to score an impressive, although likely accidental, backheel flick into the net in the 76th minute, skyrocketing the American side’s hopes. Forward Christian Pulisic was credited with the assist.

This was quickly quelled by Denzel Dumfries, who just five minutes later who rocketed a volley past Matt Turner, putting the game to bed. Dumfries was man of the match after his one-goal, two-assist game.

“We made progress but on this particular night we came up short,” said USMNT coach Gregg Berhalter.

Berhalter blamed the lack of quality on the Americans’ lack of attacking quality and experience.

“There was offensive quality that the Netherlands had that we’re lacking a little bit. We don’t have a Memphis Depay right now, who plays at Barcelona and has played in the Champions League for years. Those are not excuses. That stuff is going to come,” said Berhalter.

While it is true that the United States lacks experience, this is not the reason for their loss. One can look at the lack of a multifaceted, potent striker like Ricardo Pepi on the American roster. Wright was largely ineffective, and Ferreira, bluntly, was unplayable.

Ultimately the match disappointed, but what the USMNT accomplished should be lauded. The American side made it out of the group stage after failing to even qualify for the 2018 World Cup. And to do so with the second youngest team at the tournament unto itself is impressive. Qatar’s World Cup will ultimately be a moment to build on for a promising American squad.

Connor O'Bryan is a world soccer reporter for ESPN Gainesville. He also sometimes covers baseball and other sports. He has previously written for WUFT Gainesville and for Atrium Magazine. Connor also cohosts the "Off The Bar Podcast", a student driven podcast that focuses on the global soccer landscape.
@ConnorOBryan3
Previous Gators Move On To Regionals in NCAA Tournament
Next NFL Preview Podcast Week 13