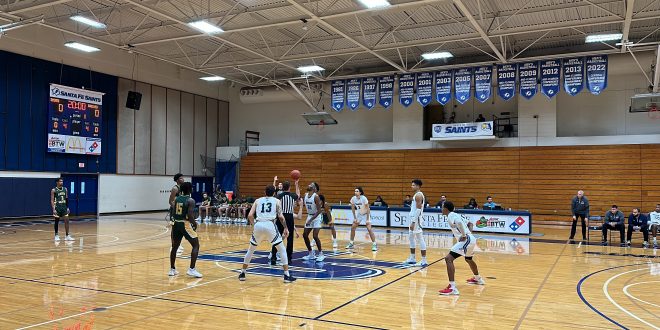 The Santa Fe Saints closed out 2022 on a solid note with a double-digit win over the Florida Gateway College Timberwolves. The Saints dominated in the first half and came away with a 79-69 victory Thursday night at home. Santa Fe moves to 8-5 on the season.

The Saints and Timberwolves struggled to get going offensively to start the game. After the game’s first four minutes, the score was knotted at 2-2. Santa Fe sophomore guard Nasir Mann broke the streak of misses with a three at the top of the arc.

The triple started a 13-0 Saints run. Florida Gateway continued to struggle offensively. The Timberwolves hit an eight-minute-long scoring drought that ended midway through the first half.

Saints redshirt sophomore guard Jalen Speer hit a deep 3-pointer to make it 25-9. He scored a layup on the next possession. He scored seven straight points for Santa Fe and helped make it 27-9.

After trailing big, the Timberwolves started hitting shots from beyond the arc. Two straight 3-pointers cut the Saints’ lead to 33-20. Santa Fe redshirt sophomore Nigel Martin connected on a three-point play on the next possession.

Florida Gateway started the second half with two quick scores to get back into the game. A fast-break dunk helped get the game back within single digits for the Timberwolves, trailing 41-33.

The Timberwolves kept it close, but Speer and Mann continued to hit big shots to keep the Saints in the lead. Mann hit a shot from beyond the arc to help get the Santa Fe lead back to double digits, and Speer scored a jump shot on a later possession to force a Florida Gateway timeout.

The Timberwolves kept it closer in the second half, but a solid first half helped from Santa Fe helped the Saints secure a 79-69 win.

Santa Fe shot efficiently from the floor — finishing with a 48.3% shooting percentage. Mann and Speer led the team in scoring and finished on a combined 15-28 shooting. Mann finished with 24 points, while Speer scored 19.

Florida Gateway College shot 9-21 from beyond the arc. Its consistency from 3-point range helped keep the Timberwolves in the game, but it wasn’t enough to give them the win.

The Saints also found an advantage down low. Santa Fe outscored Florida Gateway 32-12 in points in the paint.

Santa Fe will not play another game until after the new year. The Saints’ next game will be at home against Indian River State College Jan. 2 at 4 p.m.