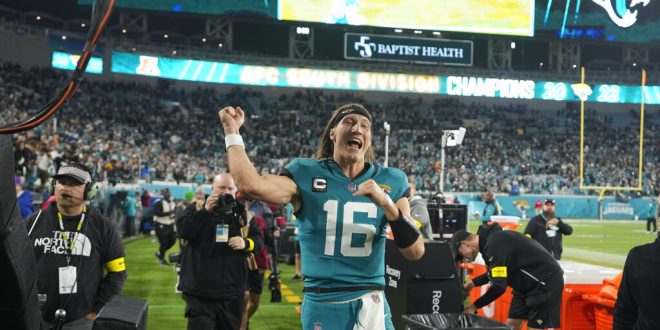 Jags Set to Host Chargers in NFL Wild-Card Round

The Jacksonville Jaguars and Los Angeles Chargers will kick off the AFC Playoffs Saturday night at TIAA Bank Field.

After finishing dead last in the NFL in back-to-back seasons, the Jags went 9-8 this season under first-year head coach Doug Pederson to win the AFC South and clinch their first playoff berth in five years. Former Jaguar defensive end Jeff Lageman praised Pederson’s consistency, which has allowed him to build a “belief system” with the players.

“When you have a coach that provides that message, . . . there’s a belief system that is in place and the players trust the coach,” Lageman said.

Jacksonville won its last five games of the regular season and punched its playoff ticket with a 20-16 home win last Sunday against the Tennessee Titans. Following the win, Jaguars quarterback Trevor Lawrence compared the matchup’s intensity to that of the “first round of the playoffs.”

Lawrence, however, remains questionable ahead of Saturday’s contest with a toe injury. If Lawrence is ruled out, 29-year-old quarterback C.J. Beathard will start for the Jaguars.

Bolts Aim to Bounce Back

After finishing 10-7 and second in the AFC West, the Chargers clinched the top wild-card seed and will make their first playoff appearance under third-year quarterback Justin Herbert. The Bolts will look to bounce back after they suffered a 38-10 home loss to the Jags in week three.

The Los Angeles defense allowed over 150 rushing yards and conceded three passing touchdowns to Lawrence. Offensively, the Chargers gained only 26 rushing yards and Herbert completed just 55.5% of his pass attempts. Wide receiver Mike Williams hauled in the Bolts’ only touchdown of the game, but he’ll miss Saturday’s matchup due to a back fracture.

Chargers’ WR Mike Williams suffered a fracture in his back last Sunday that is expected to sideline him the next two to three weeks, meaning that, barring an LA Super-Bowl run, his season is over, per @LindseyThiry.

Kickoff is scheduled for 8:15 p.m. and the game will air on NBC. The winner of the contest will advance to next week’s Divisional Round to face the No. 1 seeded Kansas City Chiefs at Arrowhead Stadium — unless the No. 6 seeded Ravens upset the Bengals in Cincinnati.

Hi, my name is Griffin Foll and I am currently a senior at UF studying sports media journalism with a concentration in political science. I contribute weekly web and radio content for WRUF ESPN Gainesville and help cover the World Cup/Champions League soccer beat. Be sure to check out some of my recent articles!
Previous Buccaneers Host Cowboys in Wildcard Round
Next Felder Taking a Leave of Absence from Gators Roster