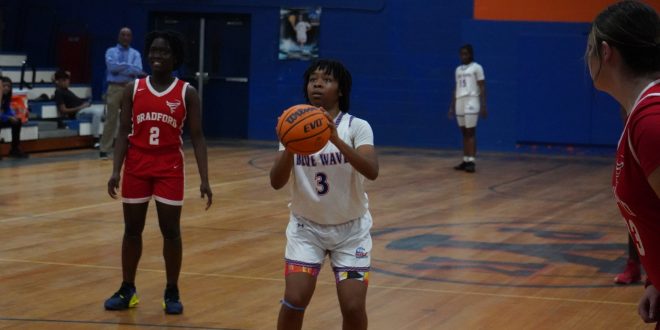 By: Seth Zapata and Regan Roberts

The 12-2 P.K. Yonge Blue Wave looked to bounce back from their tough loss against Wildwood on Monday night. Zion McRae put on an offensive showcase, boasting a total of 39 points, a new season high for the sophomore guard. The Blue Wave carried the momentum she created early on to overtake Bradford by a wide margin of 21 points, never losing the lead.

Both teams had a slow start offensively, but P.K. Yonge played a scrappy brand of basketball. Their high-pressure defense caused turnovers, transitioning to a high-paced offense, allowing three consecutive offensive boards to start the game. The heavy defensive pressure continued from their 1-3-1 trap, which allowed McRae to push the tempo on fastbreaks. She scored 19 of the Blue Wave’s 21 first-quarter points. Bradford’s offense picked up the pace towards the end of the quarter, partially closing the gap down to a 6-point deficit, for an end-of-quarter score of 21-15.

The Blue Wave tested their range, making two three-pointers early on. Both teams shifted offensive gears, exchanging several fastbreak layups. McRae continued to make her presence felt, scoring another seven points. When she was subbed out, Bradford took advantage, as the lead shortened to 33-29.

P.K. Yonge continued their defensive pressure, causing Bradford to commit several turnovers, which the Blue Wave transitioned to many fast-break opportunities. The high-scoring quarter ended with five unanswered points by the Blue Waves. The half finished with a score of 38-29, P.K. Yonge’s biggest lead of the game so far.

Bradford came out of the half with a quick offensive push. They continued to up the tempo by scoring a quick fast-break layup. The Blue Wave responded quickly though, answering with their own points, and forcing two consecutive turnovers. Bradford’s ball movement allowed them to make another push. Three different players scored within three minutes and P.K. Young’s lead was shortened to 42-38.

After a quick timeout, Freshman Ashlyn Young had a great offensive spurt, making a three-pointer as well as an and-one. P.K. Yonge’s defense continued to put pressure on Bradford, which caused several offensive mistakes that let the game slip away from them. An end-of-quarter Blue Wave run included an and-one from McRae and a three-pointer from both Young and Reniyah Clark. McRae’s point total sat at 35 by the end of the quarter, just one point off of her season high.

P.K. Yonge carried their momentum from the quarter before, with Clark and McRae weaving through the defense early on. Layups from the duo extended the lead to 63-42. The Blue Wave attempted to slow the game down, but Bradford was able to score five points in a two-minute run. Despite the late push, they couldn’t close the large gap reaped by their turnovers before. McRae dealt the finishing blow, ending the game with a new season-high of 39 points.

Previous What’s Next for the Buffalo Bills
Next Magic Pull Off Upset Over Celtics, Again

The P.K. Yonge Blue Wave faced off against the Trinity Catholic Celtics for the 3A …