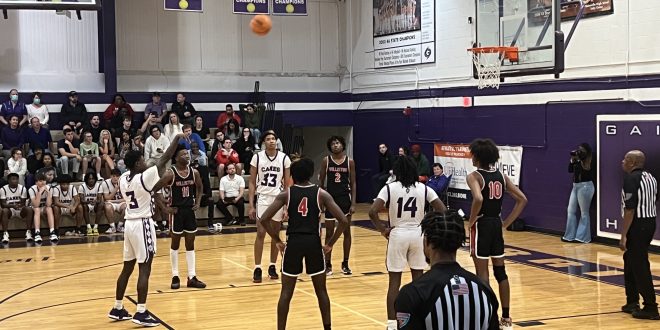 By: Lacey Rogers and Joseph Torviso

The Gainesville Hurricane’s year-and-a-half-long home win streak was put to an end on Tuesday with a two-point loss to the Williston Red Devils.

After coming off of a strong win against the Riverside Generals, the 16-5 Gainesville Hurricanes faced the 15-6 Williston Devils last night at home. The Hurricanes were seeking revenge after losing 54-46 earlier in the season at Williston.

During the first half, the Red Devils dominated the court. They came in hot with a fiery defense and an aggressive offense. The Hurricanes couldn’t keep up with their opponent, which allowed the Devils to score the first 11 points of the game. The Canes struggled to grab offensive rebounds. This gave Williston control of the time of possession. At halftime, the score was 29-16.

The Hurricanes returned to the court with what looked like a brand-new team. In the first three minutes of the third quarter, Gainesville went on an 11-3 run, bringing the score to 32-27. Theo Stephens scored the first three-pointer for the Canes, bringing energy to the court. At the end of the third quarter, Gainesville had brought the score to a six-point deficit. With the Devils up 35-29, the Canes needed every second to get ahead in the fourth.

Throughout the fourth quarter, the Red Devils were able to maintain a five-point lead. However, Gainesville managed to make it a one-score game when Stephens scored a vital layup while being fouled with less than two and a half seconds left. Stephens missed his free throw, but center Josh Hayes managed to grab the rebound off the glass. As he attempted a putback layup, a Williston player hit Hayes’ arm, causing him to lose the ball. To the Hurricanes’ surprise, the referees didn’t call a foul and the Gainesville Hurricanes fell 43-41 to the Williston Devils.

The Hurricanes Head Coach, Mike Barnes, reflected on the game by saying

“I just told them that I was proud of them. In the third quarter, it was only a couple of minutes and we got right back into the game and got the crowd back into it.”

He stated there were no hard feelings in the locker room. He hopes to restart the team’s winning streak when pl