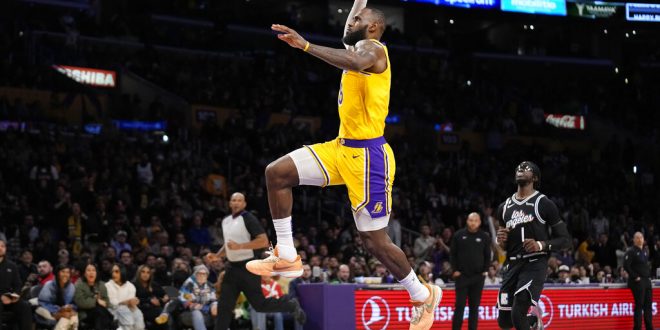 In one of the greatest careers in NBA history, King James’ next NBA conquer is in his sights. Los Angeles Lakers star LeBron James is 178 points away from the NBA record for career regular season scoring, currently held by Kareem Abdul-Jabbar. Abdul-Jabbar’s 38,387 points has topped the league record books since April of 1984.

As the 18-time All-Star and four-time Finals MVP approaches the record, he said he never thought he could catch the hall-of-famer, but that as he approaches, he thinks the emotions will hit more.

James recently became only the second player in NBA history to score 38,000 regular season points in their career. Utah Jazz legend Karl Malone is the closest to the total and third in scoring with 36,928 points in a career that spanned from 1985 to 2004.

James leads the Lakers in scoring with 30.2 points per game, good for seventh in the league. In his most recent outing, a 133-115 loss to the Clippers, James became the first player at the age of 35 or older to make nine or more 3-pointers in a game. He finished the game with a game-high 46 points and seven assists with a team-high eight rebounds.

46 points and a CAREER-HIGH 9 threes for @KingJames.

"It’s just incredible… The league is his. Stand-up guy, been amazing mentor, leader to a lot of us young guys and he’s been awesome. He’s been awesome. It’s great that he’ll be the scoring leader." pic.twitter.com/sVVg1aY5qz

"1-of-1 talent right there. You see it for yourself the way he’s playing at this age. It’s definitely inspirational for everyone just to sustain that energy and mindset to play that long." pic.twitter.com/3cuvq9Qe5w

Despite his personal recent success and an NBA record in his sights, James said it’s been difficult to celebrate his successes due to the team’s recent struggles.

With his above-30 points per game, James is expected to break the record at some point over the next few games. The earliest would likely be either during the Lakers’ matchup with the Indiana Pacers on Feb. 2 or the following game against the New Orleans Pelicans on Feb. 4.

Should James continue a trend of 40-point games, there is a chance he could break the record in Madison Square Garden against the New York Knicks on Tuesday.

Since winning an NBA title in 2020, Los Angeles has rarely sniffed the success they experienced in the bubble. The Lakers lost to the eventual Western Conference champions Phoenix Suns in the first round in six games and missed the NBA’s play-in game the following season after finishing 33-49.

In their 2022-2023 campaign, LeBron and the Lakers hold a 22-26 record, putting them in last place in the Pacific Division. A 2-10 start to the season stunted any chance for a strong start, but a five-game win streak from Dec. 30 to Jan. 7 and wins in two of their last three games have slightly helped.

Los Angeles returns to the hardwood on Wednesday night in Los Angeles against the San Antonio Spurs. The Lakers are 6.5-point favorites and have a 73.7 percent chance to win, according to ESPN Analytics’ Matchup Predictor. Tipoff is set for 10:30 p.m.

Cam is a fourth-year broadcast journalism sports and media major at the University of Florida. In addition to writing and recording radio trendings for WRUF, Cam covers North Florida HS football for The Prep Zone and Mainstreet Daily News and UF football and basketball for Inside the Gators.
Previous Santa Fe Softball Begins Friday
Next Gainesville Men’s Basketball Finally Defeated at Home