After a sluggish first half filled with sloppy play and turnovers, the Gators men’s basketball team turned things around in the second half and beat the Auburn Tigers 63-47 Tuesday night in Gainesville.

However, the win was marred by the season ending injury suffered by sophomore Will Yeguete as coach Billy Donovan said after the game he was likely lost for the season after breaking his left foot.

Florida committed 12 first half turnovers in a sloppy half that did not make Donovan happy but Florida’s play in the second half was much better as it took better care of the ball and made shots.

Guard Kenny Boynton leads Florida with 20 points as the Gators shoot well again from three point range (52 percent) and from the floor (53 percent overall) despite its sloppy first half play. 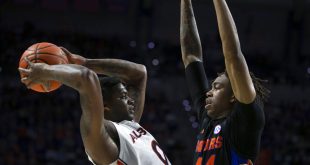 Despite not making the NCAA Tournament and having an early exit in the NIT Tournament, …